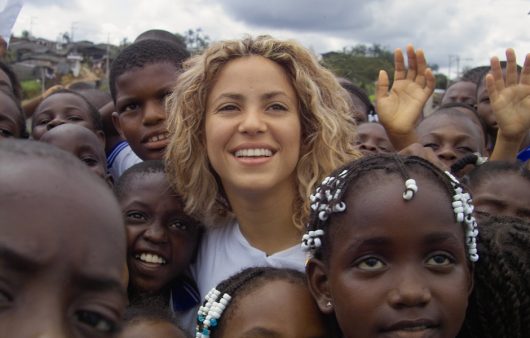 A remarkable number of singers spend time fighting poverty between recording sessions and tours. In particular, four humanitarian singers made an especially large impact through both creating and supporting various foundations.

Shakira gained worldwide fame for her pop music with a Latin flair. However, she also leads a philanthropic career outside of music.

The artist primarily focuses on universal education and early childhood development. She founded the Pies Descalzos (Bare Feet) Foundation that looks to “bring education to every child in the world.”

Shakira also supports the ONE Campaign, which mobilizes individuals to do their part to end extreme poverty.

Another campaign she promotes and supports is Habitat for Humanity. This organization strives to give everyone in the world adequate housing.

Bono is not only the lead singer of the world-renowned band U2, but he is also well known for his humanitarian efforts. He has helped fight poverty by supporting and creating multiple campaigns and projects.

These include the ONE Campaign and (RED), which advocates for an AIDS-free globe. Bono also supports EDUN, which encourages trade between impoverished countries in order to boost their economies.

In addition, he often participates in fundraising concerts to help raise money for these foundations and to promote important causes.

Don’t let the sun go down on Elton John: he’s ready to change the world. The well-known singer and songwriter is also a supporter of the quest to eliminate AIDS around the world.

He created the Elton John AIDS Foundation in order to help reduce the AIDS epidemic. Consequently, his foundation has raised over $125 million, which has gone to support 55 different countries. This support promotes education prevention and provides services to those in need.

He also supports other foundations, such as AIDS LIFE, World AIDS Day and War Child.

“No One” can deny Alicia Keys’ contributions toward fighting the HIV/AIDS epidemic. This singer also uses her powerhouse singing voice to speak for the unheard individuals.

She co-founded Keep a Child Alive, which focuses on the millions of children that die from AIDS in places where medical treatment is sub-par or unavailable. This foundation offers a range of services, including diagnostic testing and health care training.

In addition, Keys has traveled to Uganda, Kenya and South Africa to speak to those who have lost their parents to the deadly disease. She also raised money for the charity by offering a private concert as a prize in an auction.

In an interview with Everyday Health, Keys eloquently says, “Helping keep a child or mother or father or brother or sister alive means turning the worst epidemic of our lifetime into the greatest victory of our generation.”

With the help of Watermill Express, every time a gallon of water is purchased at one of the 1,300 kiosks dispensed around the United States, a gallon of clean water is donated on behalf of the buyer to a person in need in a developing country.

Humanitarian singers and celebrities continue to help raise money and awareness for global issues. All of the foundations they support and create are easy to find and donate to thanks to their philanthropic publicity.