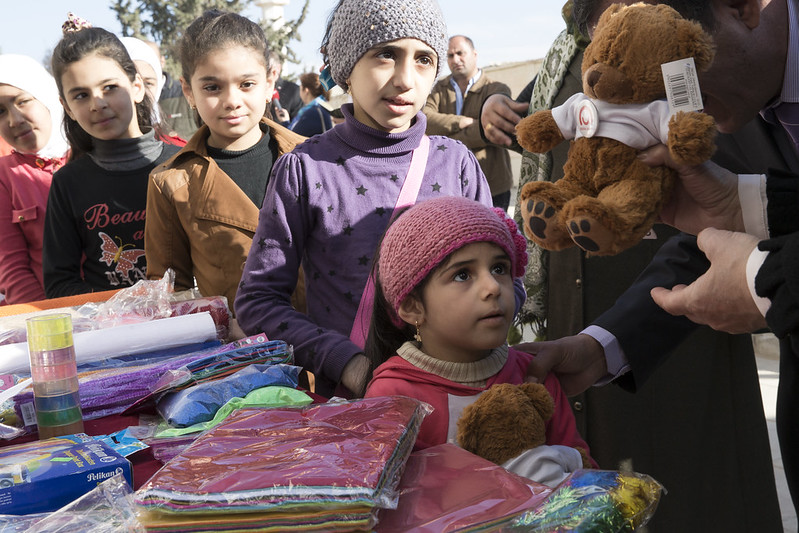 Syria, a country once a destination known for its breathtaking scenery and rich culture, remains devastated by a decade-plus long civil war. The Syrian civil war, which began as a peaceful uprising in 2011, has led to about half a million deaths as of 2022. The conflict occurs between the Syrian government, rebel groups, the Islamic State (IS) and foreign countries —  some that side with the government and others that side with the rebel groups. Unfortunately, more than 11 years of intense fighting have taken its toll on the approximately 17.5 million people who live in Syria today. Many international organizations have committed to giving foreign aid to Syria as the vast majority of Syrians require foreign aid for their survival. Crucially, violence and destruction within the country affect the impoverished most severely.

According to a March 2022 report provided by the United Nations (U.N.) Office for the Coordination of Humanitarian Affairs (OCHA), today, about 90% of Syrians live in poverty and more than 80% endure food insecurity. Access to food security, sanitation and health care has become a major issue as a consequence of the civil war. Foreign aid to Syria seeks to combat many of these issues.

According to USAID, roughly 75% of Syrians today are specifically in need of humanitarian foreign aid. Aid can come in the form of food, health care supplies or other basic commodities. The U.N. suggests that cross-border aid, which includes helping people cross the border and transporting aid directly into the country, must remain active. In late May of 2022, the U.N. Syria Commission called on the Security Council to ensure that the border remains open so that organizations can provide the necessary aid.

Currently, there is only one authorized border crossing into Syria, known as Bab al-Hawa, between Northwest Syria and Turkey. Foreign aid requires this crossing to be open so that goods and services can reach the country. Moreover, the U.N. estimates that nearly 15 million people across the country rely on foreign aid. In certain parts of the country, the number of people receiving aid can be even higher, particularly in more conflict-riddled regions.

Of the many forms in which aid can come, food and health care are the most typical and most vital. Food prices are rising while food availability diminishes. Foreign aid can be partially helpful in bringing food supplies to people who either do not have adequate access to food or cannot afford it.

The largest suppliers of foreign aid to Syria are the European Commission, part of the European Union (EU), which has supplied more than $140 million so far in 2022, and the United States, which gave nearly $15 billion from 2012 to 2022. In addition, the United Nations plays a large role in the delivery of aid to Syria. The U.N.’s food-assistance branch, the World Food Programme (WFP), estimates that 5.6 million Syrians receive aid from the WFP monthly. The process of bringing foreign aid to Syria is a worldwide effort, yet challenges remain severe.

The EU’s European Civil Protection and Humanitarian Aid Operations stated that civilian attacks and attacks on hospitals thwart international aid efforts. Limited access to the country combined with precarious and violent conditions once inside present challenges in transporting aid. The widespread and persistent issues that the Syrian people face, including recurring displacement, make foreign aid even more difficult to circulate. Another challenge is that violence and disturbances in other parts of the world, such as in Ukraine at the moment, place Syria in a somewhat less visible role on the international stage. In particular, a shortage of products, such as oil and wheat from Ukraine, has caused disruptions in Syrian aid programs.

The current exception, which allows aid to cross the Bab al-Hawa border in Northwest Syria, the last open border into Syria, is set to expire on July 10, 2022. That border opening is a result of a rare policy exception that the U.N. Security Council issued in 2014, which contradicted the Syrian government’s wish to not have foreign interference in Syria. The Security Council resolution required the border at Bab al-Hawa to remain open, which has brought necessary aid to Syria for the past eight years.

Many international organizations, including the U.N. and the EU, believe that this channel is necessary for aid to make its way into Syria. The U.N. Security Council needs to vote to extend the exception before the July deadline to ensure that aid can reach the Syrians in need. Those tracking foreign aid to Syria are hopeful that, if the resolution is extended, the border will continue operating at the status quo and aid will continue to cross the northwest border.