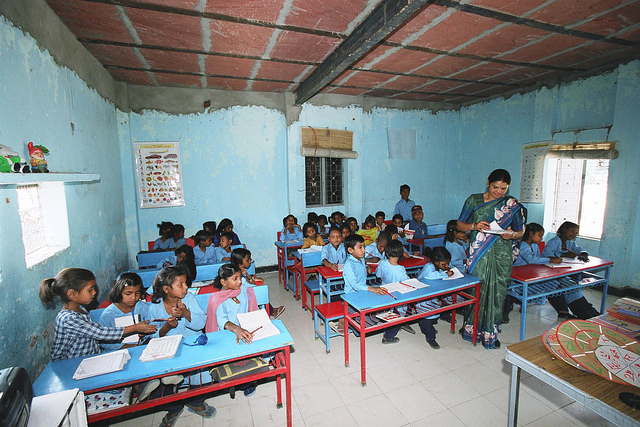 India, located in South Asia, has a population of 1.2 billion people and is on its way to becoming the world’s most populous nation by 2030. However, the country still struggles with providing its growing population with access to quality healthcare, potable water, education and clean energy. The education sector in India, in particular, requires special attention, since so much of the nation’s personal and national development is based upon it.

India, being a developing nation, has struggled in this area for a very long time. For instance, even in the late 1980s, between 30 and 40 million children of primary school age were out of school. Foreign aid to India, as a result, proves to be an effective investment in this arena, and there are many ways foreign aid has advanced education in India.

One of the ways foreign aid has advanced education in India is by initiating projects that focus on improving the sector from its core. For instance, one of the three major goals of USAID’s Global Education Strategy is “improved reading skills for 100 million children in primary grades.” Focus on the children in primary grades is essential, as so much of a country’s future depends on it. For instance, according to the World Bank, “an increase of one standard deviation in student reading and math scores is associated with an increase of two percentage points in annual gross domestic product (GDP) per capita growth.”

In order to advance this target, USAID supports 10 initiatives in the country and partners with the government of India to “identify, support and scale early grade reading innovations developed in India.” Additionally, USAID focuses on improving the capacity of educators to improve pedagogy and teaching.

For instance, the Teacher Innovation in Practice program works to positively impact the teaching practices of 14,657 teachers to improve early grade reading outcomes of more than 564,000 primary school children in the states of Delhi and Uttar Pradesh in India. By developing teachers’ mindsets, building an enabling environment and improving pedagogical skills and knowledge, the main goal of this program is to reignite teacher motivation to drive better student learning outcomes.

Other initiatives focus on improving the literacy rate in the country, which was as low as 19.3 percent shortly after independence in 1951. USAID, in partnership with Tata Trusts and the Center for microFinance, is leading an initiative called the Nurturing Early Literacy Project that aims to “shift the prevalent rote-based pedagogy in India to one that views the child as an active learner.”

The project incorporates different approaches, including in-class sessions for teachers and equitable access to libraries for children, both in schools and communities. The aim of this project is to improve the reading skills of more than 90,000 primary school children in the states of Rajasthan, Maharashtra and Karnataka.

India reportedly spends a mere 3 percent of its GDP on education, making foreign aid geared towards development in the educational sector crucial. Foreign aid has advanced education in India significantly over the years. For instance, the literacy rate increased to 65.4 percent in 2001, and currently sits at 74.04 percent.

Hopefully, with continued support from foreign investments, India will be able to develop its education sector, thereby potentially boosting its economy and reducing poverty.

Maintaining Education in Tonga: Response to Cyclone Gita Why US Businesses Should Invest in Africa
Scroll to top