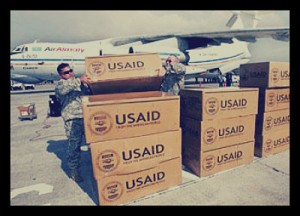 There are many disputing ideas on whether or not America should continue to invest in foreign aid, especially while in the throes of an economic recession. While spending US funds to support countries and people that most citizens will probably never visit or meet may seem counter-intuitive, foreign aid will be a factor in pulling America out of its recession. Lifting developing countries out of poverty creates more customers to buy American products, which in turn creates jobs in America.

Foreign aid job creation is not merely speculation. Currently almost half of US exports go to developing countries and this number can be expected to increase as these new, developing markets continue to open. This will greatly improve the US economy since one in five American jobs, like cell phone chips and food production, are export-based. American businesses recognize the opportunity to grow by alleviating world poverty. In 2012, over 50 US corporations delivered a letter to Congress in support of continuing funding for foreign investment. These corporations included Google, Cisco, Coca Cola, Johnson & Johnson and Caterpillar.

These corporations are aware of the huge potential payoffs of foreign investment. For example, the US has given Mexico $1.7 billion in aid over the past 45 years and now exports $16.3 billion in goods to their neighbor every year. The US has also seen its investment in Brazil offer an enormous return. America exports $35.4 billion annually to Brazil after giving $2.8 billion in aid from 1960-2005. Given that a majority of the United States’ top trading partners had previously accepted aid from the US, it is obvious that foreign aid is a good investment.

Foreign aid does not have to be strictly a question of moral obligation; it is also financially and developmentally smart. Many Congressmen are now referring to foreign aid as investment for this very reason. It may take many years until US citizens see the financial benefits of foreign investments but the eventually, revenues from these new markets will be well worth the wait. Foreign aid is less than 1% of United States’ budget and has the potential to create jobs to bring the US out of rough economic times. Contact your Congressional representatives and ask them to support funding for foreign aid.