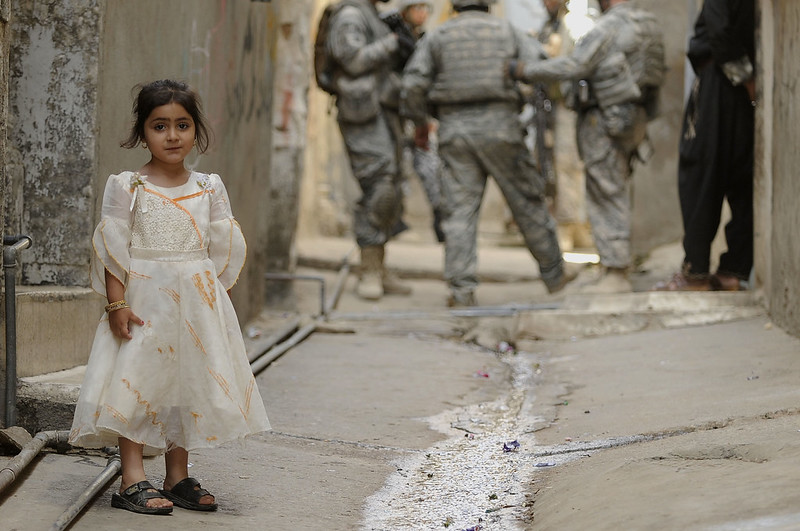 In Iraq, a 1987 law entitled the Personal Status Law and Amendments stated that a person may not marry until age 18, however, they could marry with judicial consent at age 15. Nevertheless, 24% of girls marry by age 18 and 5% marry by age 15. In Afghanistan, the numbers are just as shocking. In fact, 35% of girls in Afghanistan marry by 18, and 9% by age 15. The consequences of forced marriage in Iraq and Afghanistan are detrimental to the development of a young girl’s identity and safety, and they shed light on issues with child marriage around the globe.

Child marriage is often the result of extreme poverty or religious beliefs, and because of these factors, it is at its highest in the Middle East. In Iraq, one in four children lives in poverty, making them extremely vulnerable to forced marriage. When families receive offers of money in exchange for their child, they often accept in order to feed the rest of their family. The girls that enter these marriages often suffer abuse and rape, or become pregnant; then in some cases, they experience divorce and end up on the street. Women over age 15 are also vulnerable to abusive marriages because 85% do not work and cannot financially support themselves.

In Iraq, child marriage is not criminalized and many often consider it normal or protect it. Recently, the rate of “pleasure marriages” has skyrocketed as well. Pleasure marriages are temporary marriages that have religious approval and often occur either so the man can obtain money from the girl’s family or for sexual exploitation of the girl before the marriage ends and the wife experiences abandonment. This is detrimental to young girls in poverty and rural communities, as their family often abandons them after paying large dowries to the man’s family.

Forced marriage in Iraq and Afghanistan is an unfortunate commonality, largely because of religious beliefs but also because girls lack opportunities for independence. In Afghanistan, although there are laws in place that make it illegal to marry anyone under age 18, they rarely experience enforcement. A 2017 study by UNFPA stated that girls who complete secondary school are less likely to be married under age 18, but unfortunately, the most recent data reflects that only 44% of girls in Afghanistan enter primary school. Only half of those girls then go on to secondary school. The lack of education that leads to poverty does not only take away a girl’s chance to experience growth and independence–in Afghanistan, it makes her all the more vulnerable to a forced marriage.

The effects of child marriage on a girl’s health and well being are detrimental. Girls under 15 years old are five times more likely to die in childbirth, according to the Women’s Health Coalition. Just as devastating, a child born to a child bride is 60% more likely to die in their first year of life. Girls forced to marry often cannot access healthcare because they have signs of abuse both physical and sexual. Because of this, the risk of STD contraction is very high.

Forced marriage in Iraq and Afghanistan affects too many young girls. Girls Not Brides is an international organization working to enforce the sustainable development goals that are necessary to end child marriage, starting with poverty and hunger. Girls Not Brides outlines steps in its Theory of Change and monitors change frequently. The organization’s website allows people to email and call leaders in support of enforcing the legal age of marriage. Thanks to organizations such as that, child marriage now is declining in the world. In 2016, the percentage of women married before the age of 15 globally was 7%, as opposed to 12% in the 1990s.

There are also fact sheets and visuals to use on social media. In the U.S., the Girls Lead Act, or S.2766, is in need of support. This bill would provide funding for education initiatives for the millions of girls worldwide. This bill also focuses on the lack of girls in politics, science and technology; it will fund programs to make these fields of study more accessible. Beginning with education and stable living conditions, girls living in poverty won’t have to fear losing their futures.