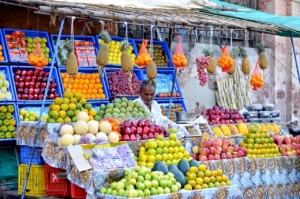 As the global population continues to grow, the demand for food also grows. The solution to this problem is not to produce more food but rather to waste less food. Globally, about one-third of food that people produce for human consumption goes to waste, which is about 1.3 billion tons. This number includes 45% of all fruits and vegetables, 35% of seafood, 30% of cereals, 20% of dairy products and 20% of meat. Unsurprisingly, studies have repeatedly shown that developed countries, on average, waste more food than developing ones. Read on to learn about food waste around the world.

The United States and Australia are the two countries that produce the most food waste in the world. In 2010, around 133 billion pounds of food went to waste in the U.S., which is $161 billion worth of food. In 2015, the USDA and EPA joined together to set a goal of cutting food waste by 50% by 2050. Despite that goal, the U.S. continues to waste about 30% to 40% of its food supply each year.

These two countries contribute massive amounts of food waste around the world despite having the wealth to address the issue.

Greece and China are the most efficient countries when it comes to limiting food waste around the world. Columbia, South Korea, the United Kingdom and France are not far behind them in terms of how other developed countries rank. The scale and reach of governmental actions to address the issue separate these countries from the U.S. and Australia in the fight against food waste.

In 2017, the Sustainable Food Movement emerged out of Athens. Greece’s immense success today results from people taking this initiative seriously and enforcing it with fervor. The country went from producing an average amount of food waste to being the most food efficient country in the world. It accomplished this feat in just three years.

Greece sets an example for the rest of the world. It proves other places could implement similar initiatives to diminish food waste around the world.

Food Waste in the Developing World

Affluent countries have the means to significantly lower their food waste. However, developing countries tend to outperform many developed countries in this particular arena. India and Brazil are two examples of developing countries displaying some of the lowest food waste levels in the world. Each year, Brazil produces almost 15 million kg of waste nationally and 71 kg per person.

Meanwhile, India wastes up to 40% of its food each year. India has one of the highest rates of food waste nationally at nearly 68 million kg. Yet, its food waste per person is quite low at 51 kg per year. To note, India’s population is nearly 1.4 billion people, showing that a gap exists between its national and personal food waste statistics.

An important distinction between developed and developing countries is the stage that people are most likely to waste food. In developed countries, the individual consumer level is where most food waste occurs. This is due to the average citizen’s ability to buy more than enough food for their family. In developing countries, the most wasteful stage of food production happens in the earliest stages of distribution. Poor infrastructure and inadequate food storage vessels contribute to the most food waste in these countries. In fact, much of the food is wasted before it ever reaches the consumer.

The global population is about 7.6 billion, and 925 million of those people are starving. The amount of food wasted globally each year is enough food to feed 3 billion people. In other words, the world has more than enough food to feed the planet, but there is a huge issue of food distribution.

By 2050, estimates have determined that the global population will become around 9 billion. This means that food production will have to increase by 70% to keep up with the world’s current path. That is a near-impossible task to accomplish. It would be more efficient to refocus efforts on limiting food waste overall.

Food waste around the world is an issue that some countries have chosen to tackle with great success while other countries falter. The future of the world population depends on all countries working to decrease food waste.

Hands for Hunger, an NGO based in the Bahamas, is making significant progress in the pervasive issue of worldwide food waste. A group of students realized that restaurants and hotels throw an immense amount of unspoiled food away every day. As a result, they set out to change that.

Hands for Hunger focuses on obtaining this typically discarded food and redistributing it to the less fortunate. In addition, it educates the public on the issue itself and solutions. The organization serves around 15,000 meals to Bahamians each week by redistributing restaurant and hotel food to its 17 outreach agencies. It delivers around 4,530 pounds of food to Bahamians in need every week.

Hands for Hunger has rescued over 1 million pounds of fresh food. Through its recovery efforts, the organization is able to donate quality food to those in need. Almost 50% of all food donations in 2017 were high-need items such as dairy, proteins and fresh fruits and vegetables. Hands for Hunger is just one of many NGOs doing fantastic work to decrease food waste around the world. While food waste is a problem, it has an attainable and feasible solution.