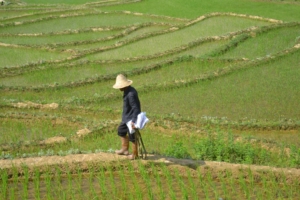 On January 24, 2022, China’s Ministry of Agriculture and Rural Affairs published new guidelines for the approval of gene-edited crops. These guidelines come amid an influx of measures “aimed at overhauling China’s seed industry” and ensuring the nation has the ability to provide enough food for its own people as the world’s largest population. Given the Chinese government’s strong investment in gene-editing, it is important to examine the impact of this technology on food security in China.

Barriers to Food Security in China

What is Gene Editing?

Simply put, gene editing is the altering of a plant’s genes to adjust or enhance its performance. Unlike its counterpart, gene modification, which introduces a foreign gene into a plant’s DNA, gene editing tweaks existing genes in plants to make genes more efficient.

The process involves the use of biological catalysts, such as “transcription activator-like effector nucleases (TALENs), Zinc Finger Nucleases (ZFNs) and CRISPR/Cas systems” that can “be engineered to bind to any DNA sequence.” The main advantages of gene editing are affordability, precision and efficiency. With gene editing, plant breeders can achieve results comparable to traditional breeding methods but within a shorter period of time and “with greater precision than ever before.” In addition, gene editing can curb hunger and malnutrition by providing higher-yielding, nutritious crops that are resilient to pests, diseases and environmental changes, thus sustaining the agricultural economies of areas that rely on farming produce for both food security and income. In crop science, genome editing has shown the ability to create less sugary potatoes and “a soybean containing high levels of omega-3.”

Although China has performed more extensive research on gene editing than any other country, none of the gene-altered crops have yet reached commercialization. However, the new guidelines may change that. The guidelines “stipulate that once gene-edited plants have completed pilot trials, a production certificate can be applied for, skipping the lengthy field trials required for the approval of a [genetically modified] plant.” This means that approval for a gene-edited plant could range from one to two years in comparison to about six years for genetically modified plants. The crop must “also pose no danger to the environment and China’s food security.” Researchers are confident that these new trial rules will significantly boost the “yields, taste and resilience” of crops, thereby strengthening food security in China.

In light of this, many researchers are actively working to research and develop a successful gene-edited crop. For example, Caixin Gao, a plant biologist and an employee of the Chinese Academy of Science’s Institute of Genetics and Development Biology, worked “on developing a strain of wheat that combats mildew since 2014.” Although Gao’s research team could remove the gene that “makes wheat prone to fungal growth,” the wheat’s post-editing growth faced stunting. However, since realizing that the issue stems from the inadequate repression of the sugar-producing gene, the researchers strongly believe that they have managed to isolate a high-yielding, fungal-resistant wheat strain. Therefore, this crop may be among the first to receive approval for commercialization. Overall, gene-edited crops show potential to enhance food security in China and across the world.