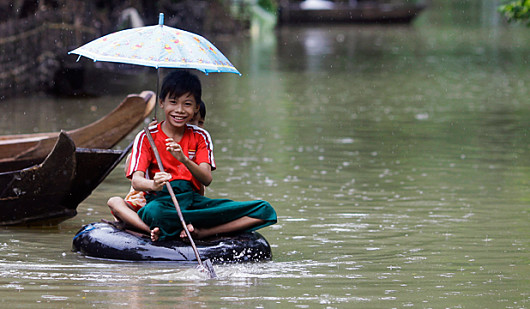 Flooding is usually just a normal part of life in Myanmar. With every annual monsoon season comes the floods, yet this year has been different.

Since June, this Southeast Asian country has experienced some of its worst flooding in decades. In total, the natural disaster has critically affected almost 1 million people and killed at least 103. There has also been an agricultural toll; water has flooded more than 1 million acres of rice fields and destroyed more than 150,000 acres.

The floods have had a widespread impact on Myanmar with all but two of the country’s 14 states affected by rains. However, some are worse off than others.

Four regions in particular, Chin, Sagaing, Magwe and Rakhine have experienced the worst of the floods. The national government stated that all four had become natural disaster zones.

Sadly these regions were also some of the most impoverished and vulnerable in “a country where nearly 70 percent of people live close to the $2/day poverty threshold,” according to UNICEF. These states face what the UN has dubbed a ‘double catastrophe,’ both extreme poverty and natural disaster.

Children comprise a substantial 34 percent of Myanmar’s population and are among the worst victims of this disaster. According to UNICEF Deputy Representative in Myanmar Shalini Bahuguna, “The floods are hitting children and families who are already very vulnerable, including those living in camps in Rakhine State…Beyond the immediate impact, the floods will have a longer term impact on the livelihoods of these families.”

Of the four most devastated states, Rakhine seems the worst off. In addition to floods, the Cyclone Komen touched down causing even more destruction. Currently 140,000 children and families have been forced to out of their homes and must live in camps designed only for short-term use.

However, even these numbers are not entirely comprehensive. UN officials have struggled to access townships in the region due to the destruction of infrastructure.

The Myanmar government in tandem with UNICEF and other UN agencies has worked recently to mitigate the damages caused by natural disasters. They have sent teams of officials to survey the destruction and to provide water purification, hygiene and health supplies to those in need.

Shalini Bahuguna also added that “We are working with the Government to get emergency messages out to local communities through radio, to tell people how to prevent water borne diseases.”

In one of the most devastated areas, Chin State, UNICEF has worked to provide stranded refugees with access to latrines constructed from local resources.

So far UNICEF has requested $9.2 million in funds for humanitarian aid for children in Myanmar. While this sum is by no means worthless, it pales in comparison to the region’s aid requirements even before the disasters. Early in 2015, the organization requested $24.9 million to assist children in Rakhine state but only managed to garner a mere $5.6 million. With this taken into account, Myanmar still needs far more foreign aid than it has received.

Though perhaps operating on a tight budget, UNICEF has still accomplished a substantial amount. They have provided 860,000 water purification tablets, which are enough for 57,000 people for just over two weeks. Similarly, they have distributed 6,000 hygiene kits for 30,000 people. Of course, much more funding is required in order to meet the needs of all of Myanmar’s people.