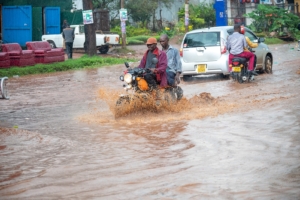 Due to global warming over the past few years, the world has seen many countries be thrown into crisis due to natural disasters. Uganda has been one of those impacted countries.

24 people have died and over 5,600 people have been displaced due to the eruption of 2 riverbanks in Eastern Uganda causing flash flooding after heavy rain. The floods have also led to 400,000 people without clean water and destroying thousands of acres of farmable land. Flooding in Uganda has left many Ugandans without the capacity to sustain their basic needs. Rain is predicted for the coming month and the local government has a goal of evacuating 100,00 people out of the Eastern Ugandan area, only 2,500 have been evacuated thus far.

Uganda has one of the youngest populations in the world. Half of the population is 15 years old or younger, so this massively impacts the work force. 76% of the country lives in rural areas and 73% of the work force works in agriculture. The floods have greatly impacted this massive industry of agriculture which affects the way the population is able to earn sustainable wages. 41% of the country already lives below the poverty line of less than $1.90/day. Fertile land and farming are seen as a way for people to make a living for themselves.

With the floods having no end in sight and likely only to get worse due to global warming, thousands of acres have been lost in this season alone and it is hard to say when the industry could make a full recovery.  The eastern and northern regions of Uganda have higher poverty populations than the rest of the country. This means flooding in Uganda is more likely to affect people who are in poverty.

On June 13, politicians in the area declared a need for humanitarian assistance in food security. The USAID and BHA are planning to deliver emergency funds to the world food program in order to help with the food crisis caused by the flooding in Uganda. The U.S. also announced a donation of $20 million in development assistance to the country. The funds are meant to ease the food insecurity by helping the agriculture industry and providing the country with improved techniques to increase productivity and to prevent losses.

The situation for many in Uganda is currently not adequate, however, the people of the world see their struggle and have committed to helping. The U.S. and other organizations have seen this problem all over the world in terms of food insecurity caused by natural disasters. While the problem may not be gone today or tomorrow, there are countless people trying to make sure that the Ugandans in the coming years will not have the same worries.