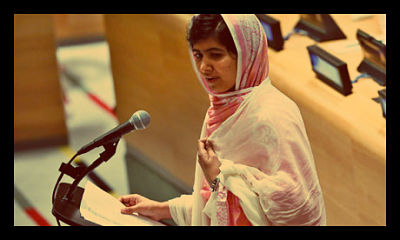 1. Malala Yousafzai works tirelessly as a young advocate for female education, despite being shot in the head last year by the Taliban for these very same efforts. She—in her bravery and brilliance– exemplifies the struggle for girls’ education everywhere.

2. Hillary Rodham Clinton, having served as the first lady and Secretary of State, is now a partner with her husband and daughter at the Bill, Hillary, and Chelsea Clinton Foundation. Within the organization, she has committed herself to improving access to female education and empowering women worldwide.

3. Richard Robbins directed Girl Rising, the extremely popular new documentary that tells the stories of nine struggling girls in the developing world. The film, which has met with great success, espouses the urgent global need for equal access to education.

4. Nicholas Kristof and Sheryl WuDunn published “Half the Sky: Turning Oppression Into Opportunity for Women Worldwide” in 2010, a compelling journalistic account of the developing world, and more specifically, of its disadvantaged women. The book, which spans the entire globe and a diverse set of lifestyles, seems to somehow convey a singular edict: in order to progess—particularly in the developing world– we must provide all women access to an adequate education.

5. Lawrence Chickering has worked for more than thirty years in order to improve the conditions of girls in the developing world, particularly in India, a country where 40% of women are not educated beyond the fifth grade level. His NGO, Educate Girls Globally, has significantly improved female enrollment, retention, and performance in India’s government schools, giving girls access to a variety of transformative resources.

2012 USGLC Report on Reports: What We Can LearnSoft Power and its Potential
Scroll to top