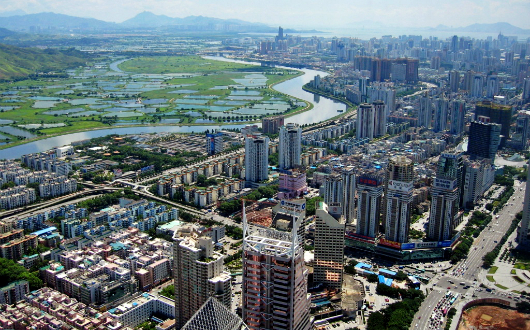 Just 30 years ago, visitors to Shenzhen would have watched the fishermen haul in their catches from Deep Bay and return to their sleepy village of 30,000. Today, however, they are more likely to notice the towering high rises and skyscrapers of a burgeoning mega-city 15 million strong.

Shenzhen represents the massive growth experienced by China in the past decades, more than the bustling cities of Shanghai, Hong Kong and Beijing do. Between the years of 1980 and 2005, Shenzhen’s population grew at a rate of 1,500% while the metropolitan area has grown from a mere 1.2 square miles to 780 square miles. Today, single developments dwarf the total floor area of all of Shenzhen’s buildings in 1979. For those that have moved to this pulsing metropolis, the quality of life is much higher; the per capita income for Shenzhen is eight times the national average.

This transformation began in 1980 when Shenzhen was declared China’s first special economic zone. This spurred a variety of economic reforms that expanded foreign investment and also drew countless migrant workers from across China. While Shenzhen is well within the Canton province of Guangdong, most city-dwellers speak Mandarin rather than the native Cantonese. Although this special economic zone became literally fenced off from the rest of China by an 85-mile-long barbed wire fence, its opportunities seemed limitless. By the 90’s Shenzhen had found its economic niche: technology.

At that time, electronics mobilized the entrepreneurs of Shenzhen and inspired countless start-ups. Hardware flowed between hands in the city’s crowded factories as technology manufacturing expanded rapidly. One such manufacturer, Foxconn, a Taiwanese electronics company, represents this extreme growth. In 1988, Foxconn opened a factory in Shenzhen. Today they have over 400,000 employees producing hardware for Apple products.

For an entrepreneurial engineer, Shenzhen’s abundant hardware manufacturing provides the perfect resources for successful ventures. The San Francisco start-up Helios took advantage of this booming market to manufacture its “smart handle-bars” for bikes. The bars include GPS, Bluetooth and a variety of lighting systems. Large companies like Facebook and Google have also jumped on the bandwagon and have purchased billion-dollar manufacturing companies. This rapid expansion of technology has labeled Shenzhen “China’s Silicon Valley.”

Yet as much as Shenzhen rewards entrepreneurship, it often ignores innovation and creativity: the city is home to the underground culture of Shanzhai, or copycat electronics. Beginning in the 1990s, Shanzhai expanded by feeding off of the increasing abundance of hardware and technology resources. By the early 2000s it had started to focus on producing knockoff MP3 players and video game consoles. Predictably, today Shanzhai has progressed to smartphones; some estimates suggest that they command 25% of the global mobile phone shipment market. According to the Guardian, “the phones that fueled the Arab spring were soldered in the back streets of Shenzhen.”

This rapidfire manufacturing has also raised some concerns. In 2010 a “suicide crisis” occurred, when ten employees of a Foxconn and Apple factory committed suicide. This tragedy prompted investigation into the working conditions of many factories and ended with Foxconn moving 300,000 jobs out of Shenzhen.

While Foxconn and Apple have claimed to have made improvements to working conditions, questions still remain. In 2012, the Fair Labor Association found that a Foxconn factory had violated 50 local regulations at three of its plants. According to an undercover BBS investigation, many Chinese hardware factories have more than 60-hour work weeks. One undercover reporter worked for 18 days in a row, despite requests for leave.

Stories like these mark Shenzhen as a city of extremes. Launching upward from the sea, it has changed drastically to become a world of big success and quiet suffering. No longer a city of fishermen, its aspiring techies have set their sights on caviar. While still a cautionary tale, this is just one way in which the developing world has struck gold in the 21st century.