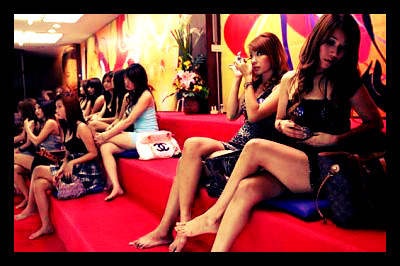 “Whores’ Glory” is Australian film-maker Michael Glawogger’s third documentary in a series including “Megacities” and “Workingman’s Death.” The film travels from Thailand to Bangladesh to Mexico into the lives of local prostitutes; three countries, three cultures, three religions – one profession.

At the Fish Bowl in Thailand, women sit behind a one-way glass fixing their hair and gossiping about their mothers until their number is called, signaling that their services have just been bought. On the other side of the glass a soon-to-be-client tells the camera how much he loves his wife and that he does this so he can respect her at home.

In the City of Joy, oral sex is forbidden since the mouth must remain pure for prayer. Contrary to their patriarchal religion, the madam’s word is law inside the ghetto, and women run every facet of life, from the adolescent girl flirting and laughing in the alley to the retired prostitute who now serves as a maid and cook. Indentured girls call up their ‘sweethearts’ to demand more visits and save their money to one day buy their own girls.

In the red-light district of Reynosa, Mexico, a prostitute and her john allow their entire interaction to be filmed, which proves to be, as one critic wrote, “as sexy as buying half a pound of roast beef at the deli counter.” Another woman describes how she no longer fears death because Lady Death is watching over her and promises smooth deliverance.

The film offers no judgment, neither on the prostitutes nor their customers. A young Bengali girl stares boldly into the camera asking if there is no other path for women to take; clients transform from misogynist cronies to shy romantics once doors are closed – suggesting that where women have the fewest options, it’s the men who are the most confused.

Glawogger believes that “the female/male relationship of any given culture can be depicted in prostitution,” but without interviewers or a concluding theme, the film is left largely open to interpretation.

The New York Times calls the documentary “a melancholy film that begins in an outer circle of hell and works its way to the depths,” while a writer of Salon thought it demonstrated “tremendous compassion, and more than a few moments of piercing clarity.”

The powerful documentary illustrated tenderness where none was asked for, powerless women who have held on to their faith and hope of a better future for women who had no reason to expect one.