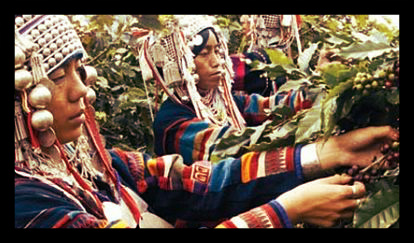 Do you like to drink coffee? If you are like me and happen to need a cup every morning in order to function properly, here is a chance to drink your single-origin morning nectar and help to alleviate poverty all at the same time.

Some readers may have heard of the Golden Triangle, or the border area of Laos, Myanmar and Thailand. It is one of the largest opium-producing regions in the world.

One of the reasons that people resort to growing and selling opium is the grinding poverty experienced by the ethnic minorities that live across the borders of the three countries. Many of the minority groups have very few rights and are often discriminated against.

In the case of Thailand, many hill tribes members do not possess Thai identification documents—rendering them unrecognized as Thai citizens.

This consequently impedes them from accessing many basic public services such as health care and education. This combination of decades of poverty and disenfranchisement has driven minority groups towards illicit drug trade.

However, for the past few decades some tribes—among them the Akha of northern Thailand—have shifted to growing cash crops such as coffee. Nevertheless, the revenue they receive through trading with large companies was far from mutually beneficial. Enter Wicha Promyong—a successful Southern Thai entrepreneur—and his Canadian colleague, John Darch, who had spent many years in the banking sectors of Canada and England.

Together, they founded Doi Chaang Coffee with the goal of bringing development and sustainable prosperity to an Akha village on Doi Chaang Mountain.

What the Canadian-registered company does is unprecedented: 50% of the ownership of the company is given to the tribe, who also receives 50% of the profits as well as all of the money obtained from selling the green beans. Amazing!

What has this innovative and charitable form of a corporate-grower relationship achieved for the village so far? Well, they have done a good many wonderful things.

From an isolated village that was hitherto neglected by the authorities, left without paved roads, a hospital, schools, or even running water, the income from growing coffee allows the Akha tribe to become more self-sustainable. The village now has its own all those that it had erstwhile been lacking. It even has its own library and a coffee academy!

The business philosophy of Doi Chaang Coffee demonstrates that multinational commodity trades do not have to be exploitative in order to be profitable. It also suggests that perhaps the key component in establishing an equality and dignity based business model is simple and straightforward: the desire to be fair.

Readers in North America can purchase Doi Chaang Coffee both at their local Safeway and other supermarkets—if they are in Canada—as well as on their website if you happen to be in the U.S.