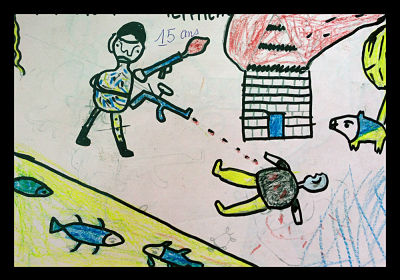 In the Central African Republic (CAR) broils a sectarian conflict that has left 210,000 fleeing its capital and over 500 dead. Violent clashes between Muslim and Christian militias in the nation’s capital of Bangui have world leaders scrambling to avoid a possible genocide in the strife-ridden country.

In fear of the mass killings, kidnappings and rapes ravaging the capital, hundreds of refugees have risked boat rides across a branch of the Congo River to escape the violence while 40,000 have decided to camp outside the French-controlled Bangui airport, a place of stability and safety for the displaced Africans.

Half a century’s worth of political chaos has left the land-locked country easy pickings for its current rebel terrorists.

After the CAR gained freedom from France in 1960, it remained under despotic rulers for three decades. In 1993, the country began its first civilian rule, which fell a decade later to a military coup led by then rebel Francois Bozize. He instated himself as president and ruled uninterrupted until the rebel coalition Seleka, meaning “alliance” in the Sango language, overran the capital in March and ousted him.

Since the most recent coup, the country has fallen even further into disorder, with the dissembled rebel and Christian militias fighting one another. The reappointed Prime Minister Nicolas Tiangaye, a former human rights lawyer, expressed dismay at the deterioration of his country.

France sent 1,600 troops to support the African Union-led forces on the ground, with hopes that other United Nations forces will help to restore order to the area. A visit by Samantha Power, the American ambassador to the United Nations, to CAR has reinforced her opinion that further action is necessary.

“I come away from our time in CAR very concerned about the extent of the polarization, the tautness of the society and the temptation that families and communities that have been victimized have to take justice into their own hands,” said Power.

Power’s fears arise from concerns that the conditions in the CAR may engender genocide. With both Christians and Muslims facing casualties, a desire for revenge may drive civilians to join militias. The Security Council passed a resolution to send 6,000 African troops to help bolster the 1,600 French troops already stationed. Whether that will be enough to quell the rebels, CAR refugees can only wait and see.

Liu Xiaobo: The Nelson Mandela of China Israel: Consistently Up for Debate
Scroll to top