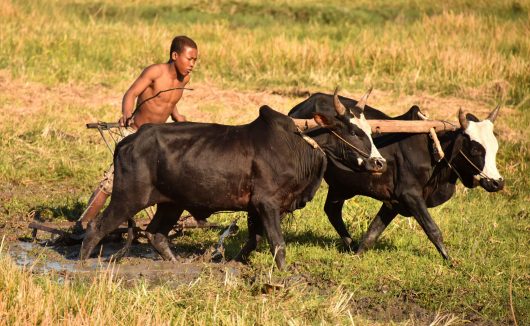 Although Africa as a continent possesses 54 diverse and independent nations, those nations located below the Sahara Desert are often grouped into one region. Though it is helpful to use this regional grouping in some instances of data gathering and processing, it is also important to ensure when doing so that the individuality of the nations is not lost and is, instead, carefully noted, as such individuality creates significant statistical differences. For example, although it can be easily asserted that 54 percent of the total African work force is found in the agricultural sector, such a statistic is entirely off-base when considering the case of nations such as South Africa, Angola and Mauritius, where less than 20 percent of all employment is found in agriculture, or nations like Burundi and Madagascar, where over 80 percent of employment is in the agricultural sector.

That being said, the impact of a nation’s agricultural systems is still so significant that a one percent increase in agricultural per capita GDP would actually cause a decrease in the poverty gap five times larger than a one percent increase in per capita GDP of any other area. Further, it is a widely shared belief amongst development economists that the area most impacted by agricultural growth is in non-farm income and employment. In other words, no matter how large or small a nation’s agricultural sector is, it has an immense impact on the nation overall. As a result, it is no wonder that addressing the agricultural sector is inherently necessary in the effort to address the 40 percent of the world’s poor that live in the Sub-Saharan Africa region.

Such is exactly why the work of Esoko Networks Limited is so important. As a technology platform that works to bridge the information gap for farmers in Sub-Saharan Africa, Esoko strives to improve the production yield and make farmers more market savvy through multiple facets – and all through the personal ease of the ever-ubiquitous mobile phone. Esoko provides up-to-date market information such as current prices and also includes weather alerts – the latter being an increasingly serious matter, as fluctuating environmental conditions due to climate change has forced changes in agricultural practices in many areas. Additionally, Esoko allows individuals to share information regarding agricultural practices and technologies, old and new, effectively creating a farmer-specific library of information from which to learn and improve one’s production.

Perhaps most exciting, this technology also has a feature which allows buyers and sellers to identify and connect with each other – creating a mini-market that can focus specifically on interactions between smallholder farmers while also providing access to larger markets. As a final measure, Esoko has included a system to survey the individuals who use their technology. This system has been so effective that it has brought down UNICEF’s profiling error rate to an astonishing zero percent – it was previously at 55 percent.

Overall, Esoko has been found to increase income for those farmers who use it by about 10 percent- and all by simply creating a network for farmers in Sub-Saharan Africa to communicate, connect and learn.

UNITAR Provides Instruction to Least Developed Countries Causes of Poverty in Kenya: The Relevance of Education
Scroll to top