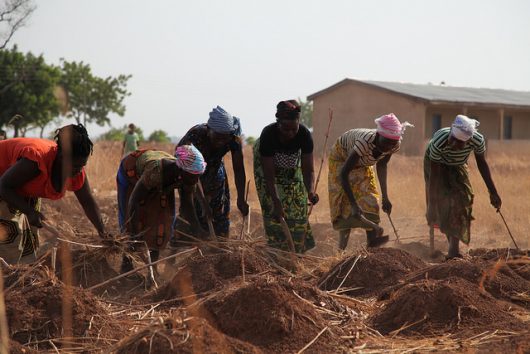 Alloysius Attah grew up on one of the many maize farms in the Volta region of Ghana, under his aunt’s care. But after 15 years of farming, Attah knew very well the number of challenges small-scale farmers endure, and he wanted to do something about it.

The main challenge Ghanaian farmers face is that they have little or no access to farming information and services. Only those in the cities of Ghana have access to updates on market prices, growth innovations and weather patterns. For Ghanaian farmers in rural areas like Volta, predicting even the next day’s weather is difficult, and could mean a huge difference in revenue for the farm. Even when this information was available, it is usually not in languages farmers could understand, given Ghana’s vast language and dialect diversity.

Almost half of Ghana’s working population and its land are involved in farming.  TheWorld Bank suggests that around 80 percent of agricultural output in Ghana comes from small-scale farms. Food security in Ghana is imperative to the country’s stability. When these farms succeed, the whole country succeeds. When they don’t, thousands of people struggle to get enough food to eat.

Attah wanted a way to help farmers receive the information they needed to help their farms thrive. As a young adult, he left his aunt’s farm and started learning how to code, pioneering a career in technology. In 2011, he realized cell phones were the answer. Cellular devices were becoming more popular in Ghana, and most farmers had access to at least a basic cell phone. Even the simplest devices could deliver prerecorded messages with the latest information on productive farming.

Attah began his start-up, Farmerline, and today, it has more than 200,000 farmers using its services to increase food security in Ghana and nine other African countries. The platform offers farmers several services, such as market prices, agricultural tips and weather forecasts in their own local language. It also connects potential buyers and businesses to the farmers, such as NGOs, global food companies and more through farm data, auditing, mapping and profiling services.

The company estimates that some farmers increased their revenues by more than 50 percent using Farmerline. This is a huge return, seeing that Farmerline only costs farmers $2-3 for a few months. The company created a gigantic agricultural network that reaches even more people in need of food. Farmerline broke down literature and language barriers in Ghana. Furthermore, because 80 percent of domestic food production comes from small-scale farms, food security in Ghana is steadily rising.

The company’s success was recognized with the King Baudouin African Development Prize. Along with two other start-ups, Farmerline won 367,000 Ghana Cedi to fund its business in early 2017. Attah is ecstatic with the win, and hopes to use the prize money to expand his business. The field of entrepreneurship in Africa is tricky, given high taxes and a lack of investors. Attah says there are plenty of successful start-ups in Africa, but transforming into a successful long-term business is nearly impossible without significant funding.

Up until now, Farmerline succeeded on the revenues of its customers and partnering NGOs, but the prize money will give it a new boost to take the company to the next level. Several investors and partners from other countries, including Mexico and Peru, have shown an interest in Farmerline’s technology. Attah welcomes the change. He ambitiously wants to help farmers all over the world. Attah hopes by 2020 he can have one million farmers using Farmerline and even more people breaking out of the poverty cycle as food security in Ghana and across the world improves.