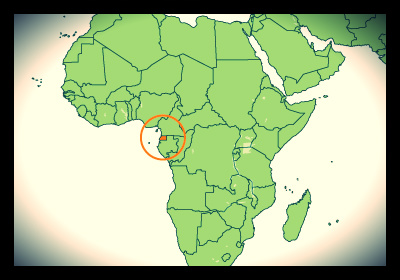 Being one of the last remaining colonies of the once expansive Spanish Empire, Equatorial Guinea became independent in 1968 during the rule of Spanish General Francisco Franco. This West African nation is very interesting in many aspects. Its capital is located on an island faraway from the mainland, it is the only Hispanophone country in West Africa—barring the territory of West Sahara—and it also has the highest gross domestic product (GDP) per capita in Sub-Saharan Africa.

However, in this relatively prosperous country, approximately two-thirds of the population lives in extreme poverty.

Despite the discovery of oil and other natural resources that the countries of West Africa have been bequeathed with by their geographical locations and an extremely small population of less than a million people, it is rather paradoxical that the richest country in Sub-Saharan Africa and the region’s third-largest oil producer whose size is roughly the same as Massachusetts allows more than half of its people to fall into abject poverty.

Moreover, other statistics regarding the country’s standard of living are also equally — if not more — frustrating. Only about half of the country’s population has access to clean drinking water, overcrowded living condition is—surprisingly given the country’s low population density—rampant and very few children enjoy the advantages of urban life such as education, medical services and recreational facilities.

Despite the grinding poverty suffered by hundreds of thousands, Equatorial Guinea seems to often escape the radar of global attention due to the highly distorted numerical means, which shows the country in good standing in terms of GDP per capita. However, in reality, there is a flagrant discrepancy that is indicative of a rather stark disparity between the have and the have-not.

To make this inequity even more unsettlingly palpable and conspicuous, the country is also building a brand new and expensive capital city on the mainland, hundreds of miles away from where the majority of the already sparsely populated country lives. Currently, Malabo, situated on an island to the far northern reaches of the country, is the capital, while Bata, an Atlantic seaport, serves as the country’s largest city.

However, Oyala—under construction—will serve as Equatorial Guinea’s President (and Africa’s longest-ruling dictator) Teodoro Obiang’s new capital. What is his supporting rationale? His government’s and his own safety and security. This project is expected to cost billions of dollars before it finishes in a country where over 60 percent of the population is struggling to live on less than $1 per day.

It is clear where at least some of the immense amount of wealth of this nation goes. In 2012, the French police sent out an arrest warrant of Teodorín Obiang, the son of the Equatoguinean president who had to escape Paris back to his own country. Upon investigation, they found evidence of an obscene accumulation of wealth. Teodoro Obiang—his father and the country’s leader—is also leading an extremely corrupt government. A criminal investigation launched in Spain revealed that there are 11 families with close ties to the Obiang family who are amassing most of the country’s wealth.

Equatorial Guinea is a tragic archetype of a country that could have been highly developed and whose citizens could have enjoyed a very high standard of living. However, the lack of democracy has allowed only a handful of individuals to accumulate most of the country’s vast wealth.