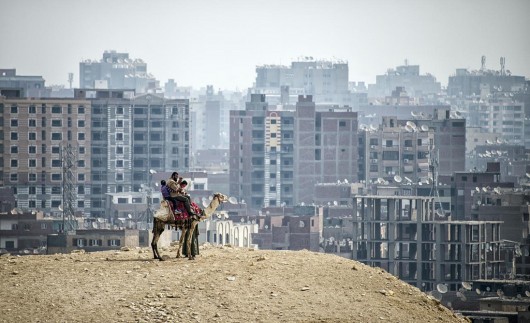 At 7 a.m. every Friday and Saturday, members of the Cairo Runners Club wake up and prepare to hit the soon-to-be crowded streets of Egypt’s capital. Yet these intrepid urban runners are not trying to exercise before work—the weekend actually has already begun (an Egyptian weekend lasts from Friday to Saturday).

Their early waking is rather a matter of health and safety than of discipline. By rising with the sun, they can avoid the noxious air pollution and congested streets that perpetually plague Egypt’s capital.

In fact, according to environmental data from the World Health Organization (WHO), Cairo is more polluted than even Beijing, Bangkok and Mexico City. It has a level of fine particulate that is seven times the WHO standards. These extreme levels of pollution often can lead to heart disease and cancer.

In order to curb air pollution, the Egyptian government has turned to a variety of strategies, including banning the burning of waste and spending more on public transportation. One program that is showing promising results is an initiative supported by the World Bank, which aims to replace old and inefficient mass-transit vehicles in the city.

The program, named Egypt Vehicle Scrapping and Recycling Program, provides cash incentives of up to 5,000 Egyptian Pounds, roughly 640 U.S. dollars, to taxi owners to relinquish and recycle their aging vehicles.

The Egypt recycling program also uses operating licenses to leverage compliance. Mass transit vehicles older than 20 years can no longer receive new operating licenses. Before the program, the age of the average taxi in Cairo was a whopping 32 years. Vehicles this old suffer from poor safety ratings, bad reliability and lack the catalytic converters that filter out pollutants from an engine’s exhaust.

Although the program is reinvigorating the transit fleet in Cairo, its effectiveness does not necessarily extend beyond the metropolitan area. In fact, since the program does not prescribe the method for disposing of these aging vehicles, owners can sell parts to private parties where the law is not in effect.

The Egyptian Environmental Affairs Agency also outlined a variety of challenges this program must face in order to succeed. First of all the program requires the complete motivation and organization of the vehicle owners, traffic department and the Ministry of the Interior.

The first project of its kind worldwide, the program also was entering uncharted waters and therefore only a small number could provide the required services. The complexities of Egyptian bureaucracy were also noted as hindrances to the program and would require attentiveness in order to coordinate affairs.

Nonetheless, since the program has been initiated in 2010, the World Bank has reported noticeable improvements. It estimates that during 2013 and in 2014, the program prevented over 130,000 tons of carbon dioxide emissions. The program also has exchanged an impressive total of 40,689 old taxis with new taxis in Cairo alone.

Many of the old taxis were in excess of 50 years old, well above the already high average of 32 years. As Cairo replaces more of its aging taxis it can expect cleaner skies and perhaps even more runners.