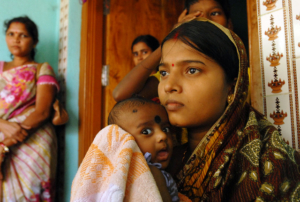 Women represent more than half of the world’s poor and make only a small percentage of the world’s income. This is influenced by various factors, including lack of access to education, abuse and gender inequality. Because women are already at a higher risk of facing the crippling effects of poverty, their situation becomes more precarious when they are pregnant or new mothers. It is estimated that 99 percent of all maternal deaths occur in developing countries.

Furthermore, in food insecure and unstable countries, adolescent pregnancy is the leading cause of death in young women, ages 15-19. Some of the leading causes of maternal death include severe bleeding, infection and delivery complications due to a lack of proper health care facilities.

Physical Effects of Poverty While Pregnant

In developing countries, where there is often little access to high-quality food and water, one of the most common effects of poverty while pregnant is malnutrition. Underweight and malnourished mothers are at an increased risk of mortality, miscarriage and preterm labor. Because they lack proper access to antenatal care, they are prone to infection and morbidity.

The WHO Millennium Goals Progress Report showed that 60 percent of women in Africa give birth without the presence of a skilled attendant. In addition, nearly 50 percent in Africa lack any antenatal care.

Malnourished mothers are also at risk of developing hypertension. Although hypertension is associated with higher risks of preterm birth and lower child birthweights, the most severe risks include preeclampsia and placental abruption. The former can cause kidney, liver and brain damage for the mother. Although this is a treatable condition if caught early, many women in developing countries have little access to health care that would offer a proper diagnosis or treatment.

With regard to placental abruption, the placenta separates from the wall of the uterus and can cause severe bleeding for the mother and prevent the baby from receiving enough oxygen. Like anemia, hypertension is a severe physical side effect directly correlated with higher rates of poverty that puts malnourished mothers and babies at great risk.

Emotional Effects of Poverty While Pregnant

In many developing countries, women do not have equal access to education or career opportunities, making them dependent upon their spouses or families. Such dependency can lead to feelings of helplessness that can affect the health of pregnant women. Evidence suggests that pregnant women who face extreme poverty are more likely to face inequality and develop mental illness.

Furthermore, humanitarian crises, such as conflict and post-conflict situations, can increase the risk of violence against women. It is estimated that 35 percent of women worldwide have experienced physical and emotional violence. In places such as West and Central Africa where child marriage still exists, women are more likely to face violence and domestic abuse.

In sub-Saharan Africa, Intimate Partner Violence (IPV) has a 61 percent prevalence in some areas. Abuse in any form, physical, psychological or sexual, can have dire consequences on women and their health during pregnancy. Victims of abuse often face physical harm and mental health issues, such as depression, post-traumatic stress and anxiety. Some victims turn to alcohol or drugs. In addition, women who suffer abuse often face unwanted pregnancies and unsafe abortions. The stress of abuse can affect many aspects of a person’s life but puts pregnant women at a much greater risk due to their already vulnerable physical state.

Efforts to Lessen the Effects of Poverty While Pregnant

Programs such as the U.N.’s Global Strategy for Women’s, Children’s and Adolescent’s Health, the U.N. Millennium Development Goals and WHO Global Action Plan have made strides in reducing the effects of poverty while pregnant. Between 1990 and 2013, the global maternal mortality rate has decreased by 50 percent.

Although maternal mortality rates remain high in developing countries, programs such as the U.N.’s Agenda for Sustainable Development and numerous nonprofit organizations are working to provide access to antenatal care and technology that would assist in identifying health problems for pregnant women. With increased food security, access to antenatal care and an increase in education and gender equality, the U.N. Agenda For Sustainable Development hopes to decrease the maternal mortality rates by at least two-thirds by 2030.

In keeping with this sustainable development agenda, the Reach Every Mother and Child Act (S.1766) is a bipartisan bill that would allow for mothers and children in these impoverished nations to receive the care they so desperately need while also providing a foundation for them thrive and contribute to the global economy. Because the U.S. already has the expertise in ending preventable maternal and child deaths, we must play a larger role in this global fight to help mothers and their children.

Send an email to your Senators today asking them to support the Reach Every Mother and Child Act.

In addition to increasing access, a greater focus is being placed on the quality of care for these vulnerable groups led by the WHO and UNICEF. The two organizations recently launched a Network for Improving Quality of Care for Maternal, Newborn and Child Health to “cut preventable maternal and newborn illness and deaths, and to improve every mother’s experience of care.” In 2017-2019, Bangladesh, Côte d’Ivoire, Ethiopia, Ghana, India, Malawi, Nigeria, Tanzania and Uganda signed on as partners and more countries are expected to join this effort in the future.

Renewable Energy in Developing Countries: Leading the Charge 5 Nonprofits that Provide Clean Water to the World
Scroll to top