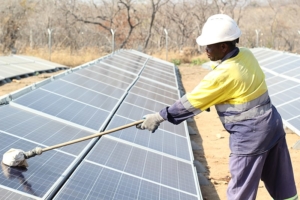 Some think that the majority of zero-carbon energy generators are being built in European countries such as Switzerland or Norway. But that is quite a stretch from reality. In 2018, the majority of the world’s new renewable energy capacities were built in developing countries. While wealthier developed countries added only 63 gigawatts of zero-carbon of energy, during the same time period developing nations added 114. Despite encountering numerous sizable challenges, developing countries are now leading the way in terms of the world’s clean energy transformation.

The effects of developing countries transitioning and installing renewable energy have been overwhelmingly positive especially for remote communities. Currently, an estimated 1.3 billion people do not have access to grid electricity, forcing them to pay absurd amounts of money for unclean lighting and heat such as kerosene oil and coal stoves. However, micro-hydro systems and solar panels have been able to combat this by being self-sufficient energy off-grid sources. For example, in Kenya, the global leader in solar panels per capita, more and more citizens are choosing to install private solar systems rather than connecting to the country’s highly unreliable electric grid.

Additionally, jobs are often created in lieu of the initiation of zero-carbon energy producers. As an illustration, when Delhi, India built a new waste-to-energy plant in 2017 that burned garbage as fuel, it immediately hired seven waste-pickers and provided job training and employment to roughly 200 women.

Currently, the greatest challenge facing the implementation of renewable energy in developing countries is reliable energy storage. Without good energy storage, communities become dependent on the natural conditions for their electricity and are subject to frequent blackouts.

Another anticipated challenge is meeting the demand of critical metals and minerals, such as nickel, lithium and manganese, to these batteries in a sustainable and ethical manner. As the demand for these materials is expected to grow tenfold by 2050 and large deposits of them are found on African soil, the extracting industry must be regulated in a way so that the economic benefits are enjoyed by the entire locality, and that labor conditions within the supply chains are correctly regulated and addressed.

To combat the lack of reliable energy storage in third world countries, in 2018 the World Bank committed $1 billion to help accelerate investment in both the development and implementation of battery storage. Individual countries have also pledged varying amounts towards the development of alternative energy with China leading the way with an ambitious pledge to spend at least $360 billion on renewables by 2020.

The share of renewable energies in the global energy market is expected to grow up to 20 percent by 2023, and developing countries are expected to play a large role in this growth. The usage of bioenergy, energy generated from biomass fuels, is also expected to decrease as solar and hydropower become more efficient.

Conclusively, the future of renewable energy in developing countries appears quite promising. Although it would be too optimistic to not acknowledge developmental challenges such as efficient energy storage, through ingenious thinking and adventitious ideas, developing countries are likely to continue to be on the forefront of achieving the goal of carbon-neutral global energy consumption.