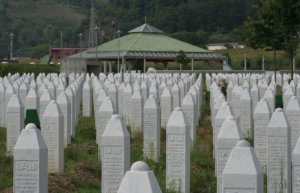 From July 11 to July 13, 1995, during the Bosnian Genocide, the Serbian nationalists killed nearly 10,000 Bosnian Muslims in the Srebrenica Massacre. During the massacre, Dutch peacekeepers, Dutchbat, who were supposed to guard the town, turned the targeted population away and, as the Daily Mail states, “handed them over to Bosnian Serb forces.”

The Srebrenica Massacre is often considered the worst massacre since World War II.

The Telegraph notes that after the Dutch failed to protect thousands of Bosnian Muslims, the Serbian nationalists divided them by gender, executed them and buried them in mass graves. These actions amassed to a genocide.

Last week, nearly 20 years after the massacre, The Hague found the Dutch liable for the deaths of 300 of the nearly 10,000 Bosnian Muslims killed. The Netherlands must now compensate those 300 families. The court argued that many of the Bosnian Muslims fled the Dutch compound for the woods, so the Dutch cannot be considered liable for all the deaths. The compensation amount is unknown. Though partial liability represents a partial victory for the victims and survivors, Mothers of Srebenica is currently considering appealing the decision.

According to The Guardian, the president of Mothers of Srebenica reacted by stating, “Obviously the court has no sense of justice. How is it possible to divide victims and tell one mother that the Dutch state is responsible for the death of her son on one side of the wire and not for the son on the other side?”

The ruling does establish a connection between the Dutch’s failure to peacekeep and the massacre, which has not been previously officially recognized as a cause of some of the deaths. The courts ruling places accountability on the peacekeeping missions and proves that the peacekeepers should have known that sending the Bosnian Muslims away would result in their execution.

However, the inability to try the U.N. highlights the inability of the U.N. to be held liable. This translates into an inability for national courts to challenge the U.N.’s actions. Further, this ruling could have significant implications for future peacekeeping missions and the accountability of those missions in war zones. While the ruling only represents a partial success for the families of victims and survivors, the ruling could motivate the U.N. and other nations to pay closer attention to their actions in other conflict regions, such as Syria and the Central African Republic.