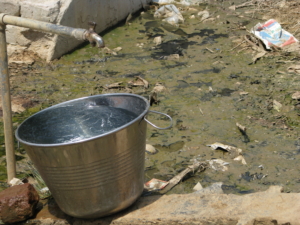 India is one of the world’s largest consumers of water, as the country has an undeniably large population. Yet, reservoirs run dry and millions don’t have access to safe drinking water. Three note-worthy causes of water shortage in India are listed.

Droughts are widely accredited as one of the notable causes of water shortage in India. The country relies primarily on groundwater for consumption and agricultural sustenance. Many sources of groundwater in India, such as Chennai’s Lake Puzhal, depend on heavy monsoon rains for replenishment. Late or short monsoons can cause shortages in the region’s expected water gain. Thus, the amount of water received is lower, as is the time the water lasts before being depleted.

The monsoon season in India is usually expected to start in June and end in September, bringing three months of rain before the dry season. Some regions, like Mumbai on the west coast, receive more rain. Other areas, like urban Chennai in the south, receive significantly less rain from the main monsoon.

In recent years, India has experienced weaker monsoon rains than usual. Weak monsoon rains result in a decrease in groundwater supply, which has a negative effect on crop production and can often lead to the failure of high-water-consumption crops like rice and wheat.

One promising practice to repair groundwater and increase drinking water in India is rainwater harvesting. Much of India’s rainwater dries up and is unused. National Geographic posits that Chennai could harvest 27 gallons of water per person, based on rainwater catchment alone. Moreover, Chennai could use recharge wells to channel rainwater into its natural, underground water aquifers to replenish the supply of groundwater. A group called mannu-vaddars have already initiated open well-digging in the city.

With over one billion people in the country, some 163 million lack access to safe water in India. The health of many Indian rivers is depleted by severe pollution. Most of India’s water pollution can be credited to unfiltered human sewage. Water sewage is one of the major causes of water shortage in India’s drinking water.

It is estimated that some 21 percent of infectious diseases in India are linked to unsanitary drinking water. Poor hygiene practices also lead to unsafe drinking water, as the water often contains traces of human feces if unfiltered. Each day, over 500 children die from diarrhea, which can occur as a result of water-borne bacterial infections and viruses.

Delhi has seen increases in diarrheal, hepatitis and typhoid infections. These diseases have been linked to the Yamuna River, Delhi’s source of drinking water. The river’s best potential for clean water comes during the monsoons when rainwater flushes out a portion of pollution. Recently, Delhi Jal Board, the government agency that oversees Delhi’s water supply, required that rainwater harvesting systems be installed in all plots over 500 square meters in Delhi. If enforced, the systems will be used to recharge Delhi’s underground water aquifers to replenish groundwater sources.

Agriculture accounts for about 90 percent of India’s water usage, with domestic and industrial use sharing the remaining 10 percent. Agriculture is extremely important for the country’s nourishment and economy, providing jobs to half of the population and accounting for 18 percent of the country’s GDP. Because agriculture drastically drains the country’s water supply, the practice contributes significantly to water shortage in India.

With help from the World Bank, some communities, like those of Andhra Pradesh, have established a model of self-regulation in regards to groundwater. The model includes successful education of farmers which has caused some farmers in the communities to decrease their groundwater use to sustainable levels, without losing out on profit. It is possible for this approach to be replicated in other Indian agricultural communities that rely on groundwater for crop production.