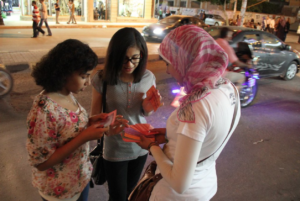 Sexual harassment in the form of street harassment (catcalling, wolf-whistling, etc) is something that most women around the world have experienced. In fact, globally, at least 75 percent of women 18 years and older have experienced some form of sexual harassment; that’s at least 2 billion women of the 2.7 billion women who inhabit the earth. While some have used the #MeToo movement as a way to bring light to this issue, others have used technological advancements to combat this reality that most women face. This was the case for HarassMap, created to combat sexual harassment.

The Story of HarassMap

HarassMap was created by a group of four women in Cairo, Egypt; that were fed up with the amount of sexual harassment they were not only experiencing, but also hearing about or witnessing first-hand. These women were fighting sexual harassment in their own ways; one of them was working at a women’s rights organization where she started an anti-harassment program in 2005. She noticed the amount of harassment she and her coworkers experienced while commuting to and from their place of work. In fact, Egypt has one of the highest reported rates of sexual harassment for women wherein 90-99 percent of women 18 and older experienced some sort of harassment. Street harassment was something women in Egypt were used to and tolerated. No one ever did anything to stop it and women did not stand up for themselves nor did they report their experiences.

As these women worked with different NGOs to raise awareness about sexual harassment and focus on forcing people to confront it and discuss it, some of the NGOs lost interest and started supporting legislation that would deal with the legal side of stopping harassment. This didn’t stop the people at HarassMap though. They continued to fight harassment using social standards and eventually got their app developed within a year. Their goal was to shift the blame from the victims to the harassers, encourage intervention from bystanders, give women a safe place to report their harassment or assault without fear of judgment and start a conversation about confronting this epidemic. They launched the app in December 2010, and it has been active ever since.

The app focuses on deterrence of harassment by allowing men and women to tell their stories while also praising those who interfere and help when someone is being harassed. The website contains helpful information for visitors, ranging from a how-to guide on interfering and definitions, all the way to legal and psychological advice for those who have been harassed or assaulted. The app itself serves not only as a safe environment where women can report their harassments but also a place to learn about sexual harassment and how to deal with it.

The app is still active, and its creators have gained worldwide accreditation and won several awards for their tireless efforts to combat sexual harassment and change the conversation surrounding it. Some of these awards stem from Cairo University, World Summit Youth and My Community Our Earth Partnership. The app has also been partnered with Cairo University and other corporations to increase the prevalence of the app and its message. Its developers have also offered classes to combat sexual harassment for businesses and universities to provide a safer environment for women in Egypt. They have also done work outside of Egypt as well, by working with NGOs and setting up similar technology across Asia, Africa and the Middle East.

Since the debut of the app, different sexual harassment and sexual assault laws have been passed as well. One of the laws, passed in June 2014, makes sexual harassment illegal in Egypt for the first time. Those who are caught harassing can face as few as six months or as many as five years in prison and pay as much as LE 50,000 ($3,000) in fines.

Even though HarassMap is growing and reaching other countries, it is still only available to Egyptians who have access to a smartphone or computer; however, it is encouraging an important conversation. One can hope that women will feel safer on the streets of Egypt and all Egyptians will be able to discuss sexual harassment and assault in a productive and boundary-breaking way.