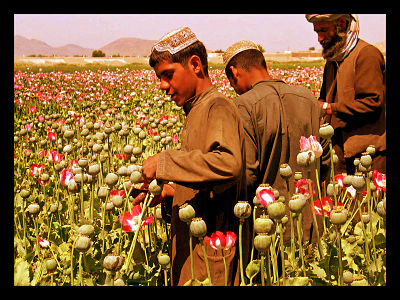 Every year, $33 billion worth of heroin is funneled into Russia and Western Europe from a few provinces in southern Afghanistan. This robust heroin trade in the countries of the former Soviet Union thrives in part because of the terrible economic conditions precipitated by the fall of the USSR. In this volatile economic environment, organized crime groups have flourished, facilitating a heroin trade that has seriously harmed nations in Central Asia, particularly Tajikistan.

According to the United Nations Office on Drugs and Crime 2012 World Drug report, heroin is “the illicit drug most highly associated with a single source” with “90% of the world’s heroin coming from opium grown in just a few provinces in Afghanistan.”

Since 2006, Afghanistan has produced more than 12,000 tons of opium, which the UNODC amounts to two years’ worth of the global demand. It is very clear that drug lords in Afghanistan are making a lot of money through the production and export of heroin. There is also evidence suggesting that terrorist organizations such as Al-Qaeda and the Islamic Movement of Uzbekistan are reaping benefits of the trade as well.

Unfortunately, this illicit drug trade has affected the people of nations outside of Afghanistan’s borders. According to the UNODC, Tajikistan has suffered immensely because of its position on the Northern trade route that transports heroin to Russia. Heroin dependency has devastated the Tajik population and has resulted in the spread of lethal diseases such as HIV and hepatitis-C. In addition, the position of Tajikistan along a primary drug trade route has promoted the rise of organized crime groups and warlords in the fledgling nation.

In Tajikistan, the direct influence of Afghan heroin can be witnessed in its purest form. In a nation economically ruined by the demise of the Soviet Union, a single substance has threatened not only the social fabric of the society but also the entire governmental structure of the newly independent nation. Tajikistan illustrates the way in which the illicit trade of heroin has devastated Central Asia. The people of Tajikistan have all been affected by the adverse consequences of heroin addiction and the diseases that so often accompany intravenous drug abuse. In addition to addiction and disease, the very framework of the state in Tajikistan is threatened by warlords who have grown fat on the profits of the drug. As criminals get richer, however, Tajikistan’s people, especially its poor, are left even more vulnerable to violence and political instability.