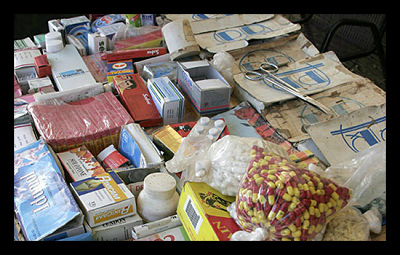 If administering public health projects in an environment complicated by security, economic and cultural issues is not presenting a sufficient challenge, drug counterfeiting can take the problem to a new level. In 2006, the World Health Organization reported that every year 280 billion dollars is lost due to counterfeiting. This does not take into account the hazards to human life caused by potentially harmful or completely ineffective fake drugs. An estimated 100,000 deaths yearly are caused due to the counterfeit drug trade in Africa alone. Counterfeiting affects all pharmaceuticals ranging from vaccines and antibiotics to anti-diabetic and anti-cholesterol medication.

Drug counterfeiting is not just a developing world problem. In 2005, the U.S. Attorney’s Office of Missouri indicted three businesses for a 42 million dollar conspiracy to sell counterfeit, smuggled and misbranded Lipitor, a mainstream cholesterol lowering drug. The FDA had to recall 18 million Lipitor tablets which is one of its largest recalls related to counterfeiting.

In Nigeria, this is a particularly big problem. This Day Live reports that in 1989, over 150 children died due to diethylene glycol present in fake paracetamol syrup. The problem reached such a high level, that sale of Nigerian-manufactured products was banned in other African countries. The National Agency for Food and Drug Administration and Control Nigeria, or NAFDAC, website continues to be filled with reports on recent impounding and destruction of fake drugs and public alert notification on drug recalls. A report on March 5 on the destruction of N500 million, approximately 2.5 million dollars, worth of fake drugs in Anambra state, was immediately followed by a March 6 report on the impounding of N270 million in counterfeit medication.

NAFDAC is employing many strategies to curb the problem including control at points of entry, inspecting manufacturing plants in producing countries and employing foreign analysts to certify drugs before exportation from India, China and Egypt. Under the leadership of the late Prof. Dora Akunyili, NAFDAC came down hard on counterfeiters and corrupt officers. Due to NAFDAC’s efforts, the incidence of fake drugs has dropped by 90 percent since 2001 and the ban on Nigerian-manufactured drugs has been lifted.

Yet the problem persists. The New York Times reports that in 2008, 84 children died after consuming fake teething mixture in Nigeria. In a recent interview with CNBC Africa, Dr. Bell Ihua, COO of NOIPolls, says 18 percent of Nigerians believe they have been a victim of fake pharmaceuticals. A whopping 70 percent worry that counterfeiting is rampant. This means that 70 percent of people actually worry that a drug they are consuming could be fake. A large proportion of victims only know they have consumed fake drugs when they have an adverse reaction.

Public awareness is a large obstacle. High illiteracy and low exposure makes it hard for the public to be on their guard. NAFDAC broadcasts short messages and jingles on the radio to educate and warn the public. Novel solutions are now slowly entering the field. Ashifi Gogo, a Ghana based enterprise, allows customers to scratch off labels inside the pill box and text the code to get a verification of drug quality. Of course, the system is not foolproof as counterfeiters can make fake labels. More campaigns and programs to educate the public will aid this effort. The involvement of community leaders can bring this down to the grassroots level where such programs really need to create an impact.