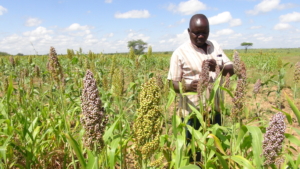 Recently, genetically modified crops have received much criticism in the media. Despite the absence of any concrete scientific data that proves otherwise, opponents remain wary of crops changed by genetic engineering.

However, genetic engineering remains a technique of key significance in food sciences. Researchers have aimed their endeavors towards manipulations of crop genome that could alleviate hunger and malnourishment worldwide. New strains of food crops are being engineered that are better in nutritional value and resistant to environmental disasters.

One of the most significant research areas in this field focuses on making the crops drought-resistant. Drought remains one of the biggest challenges in the provision of food worldwide. Most of the world’s undernourished population is geographically concentrated in the driest areas of the world; this makes their food supply even more susceptible to droughts. The United Nations Food and Agricultural Organization (FAO) reports droughts to be more severe in effect than any other physical hazards. The recent droughts in Kenya and China are proof of the calamitous effects of droughts on food production.

To offer a solution to this problem, many researchers globally are focused on introducing drought-resistant genes into common staple food crops, such as wheat, rice and barley.

In any plant organism, there are multiple genes that interact to form a complexity of arrangement that affects the plant’s response to a stressor, such as drought. One of the most important known plant chemicals that affects a plant’s reaction to the environment is abscisic acid.

Abscisic acid is a plant regulatory hormone that controls a plant’s osmotic responses to external stimuli at a cellular level. As the water level available to the plant drops, abscisic acid regulates the ionic flow through the cellular membranes. This changes the osmotic pressure within the cell, which ultimately leads to closing of stomata — the pores in the leaves of a plant that are responsible for loss of water to the environment. This conserves water within the plant, allowing it to survive in dry conditions.

To enable the plant to survive in dry conditions, the loss of water from the plant body has to be minimized. This can be achieved through abscisic acid dependent regulatory pathways. This is done by increasing the expression of abscicic acid, but only under certain conditions.

Transcription factors in a genome are non-coding parts of the organismal DNA that control the rate of transcription of a particular gene, and therefore the amount of transcribed product—usually a protein—produced. By increasing the amount of osmotic regulators in the plant as a response to environmental stimuli, the plant can conserve water resources and tolerate drought much better. The abscisic acid molecule then regulates the gene expression of other genes within the genome that are induced or repressed to tackle external stress on the plant.

So far, much progress has been made in this field: successful transgenic manipulations have resulted in more drought-resistant lines of wheat and rice. However, as with all genetically engineered products, the progress made is only a fraction of the knowledge that is necessary for reliable products. The genome of any plant is vastly complex: many different genes, transcription factors, and regulators interact simultaneously to generate any desired phenotype, such as drought-resistance. More research efforts are necessary in successfully implementing these crops as an effective solution to hunger.