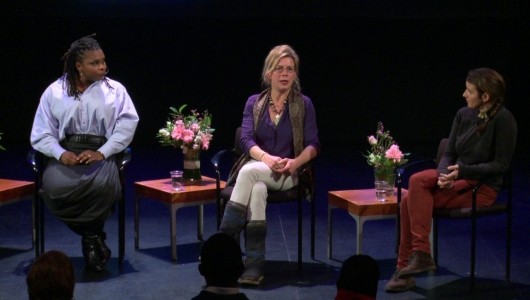 Obstetric Fistula, a medical condition virtually unheard of in the developed world, was the sole topic of a 90-minute discussion with Doctors Without Borders/Médecins Sans Frontières (MSF) on June 25, 2015. In this 2nd webcast, “A Shameful Condition,” part of MSF’s project Because Tomorrow Needs Her, three panelists discussed why women still suffer from this preventable condition, the horrific impact it has on women, their families and their communities, as well as the options for treatment and prevention. Managing obstetric fistula contributes to the fifth Millennium Development Goal, improved maternal health.

The panelists, all experts in obstetric fistula, completed many MSF projects in Africa in different capacities to alleviate this condition endured by an estimated 2 million women in sub-Saharan Africa and Asia. Africa Stewart, an obstetrician/gynecologist from the U.S., worked in Nigeria, Sudan and South Sudan. Wilma van den Boogaard, a nurse and a Master of Public Health from Holland, organized a fistula repair project in Burundi. Gillian Slinger, a trained midwife, coordinated the United Nations Population Funds’ Campaign to End Fistula and is the current project manager of the Fistula Surgery Training Initiative for the International Federation of Gynecology and Obstetrics in London. Nina Strochlic, a reporter at the Daily Beast covering women’s rights and international development, was the moderator.

This is the physical description of how obstetric fistula occurs, but it is not that simple. In prosperous countries today, fistulas rarely occur. The last fistula hospital in the U. S. closed in 1865. In impoverished countries, especially in Africa, cultural factors play a huge role in its persistence, which the panelists detailed throughout the discussion.

In Africa, the story has many common elements: young mothers-to-be, often teenagers, have prolonged, agonizing labors as long as 3 days. These young girls can be as young as 14. Their birth canals are not mature enough for delivery causing long labors. Furthermore, the babies are usually stillborn.

Due to the uncontrollable leakage and odor as well as the loss of their babies, these young women are stigmatized. They become outcasts not only in their community, but from their friends, families, husbands and other children they may have. Much confusion exists in the community about why these women have such a condition.

Few doctors are automatically trained in treating obstetric fistulas, especially in developing countries. The women with fistulas who are not afraid to seek help from medical personnel are told that it is not a medical problem, and even that it may be due to adultery, according to Van den Boorgaard. There is a strong belief in the communities that these women are cursed or bewitched. Many want to commit suicide and others become prostitutes to make some kind of living.

Slinger knew of an 80-year-old woman who suffered for about 60 years with obstetric fistula, not knowing why she had the condition. Fortunately, the MSF project was able to provide surgery to repair her condition.

Besides the lack of knowledge regarding obstetric fistula, people in developing rural communities have little or no access to emergency medical care. Transportation, such as by taxi, is expensive, or must be done by motorcycle—a method difficult enough when pregnant, let alone in labor. According to Stewart, even in Nigeria where the roads are better than most, the roads can change erratically due to armed conflict or storms. Van den Boogaard also pointed out that in areas where genocide is taking place, women just do not go anywhere. Even if a pregnant woman can get to a hospital or emergency care setting, it may be too late. For these reasons, women and their families chose to stay at home to have their babies.

However, the problem is bigger than getting to the hospital on time. Trained surgeons are needed to perform the difficult surgery. Few surgeons in Africa are inclined to perform this surgery. The panelists pointed out that this surgery does not provide a big income. In Africa, it is expected of a doctor to be rich. If a doctor does not have a large income, there must be something wrong. This problem is being addressed in one area by offering surgeons scholarships in urology or gynecology after being trained and serving 3 years in a fistula camp. Slinger urged that this same offer be provided in other needed areas.

MSF first started “fistula camps” in 2007 to provide for the neediest communities. Boogaard described the three current types of interventions in place today. The first type is non-surgical, and works best immediately or shortly after a fistula occurs. A catheter is used to eliminate urine from the bladder by-passing leakage into the womb, allowing the womb to heal on its own. The second type, called a campaign, takes 6 weeks, in which care is provided before, during, and after surgery. The third type, long-term, complete care is provided for many months and also involves before, during and after surgery care. The after surgery care includes more physical therapy and psycho-social care.

The panelists pointed on that in all settings, providing a safe environment in the camps for the women, as well as any children they already have, is a key factor in their success. Even more important is that the whole family understands the condition and the necessary after care. The two biggest after-care difficulties are abstaining from sex for 4-6 months and having a C-section for all subsequent babies. Many women in these cultures are afraid to say no to their husbands in regard to sex. When it comes to checking back into a fistula camp for a C-section, they are equally afraid to stand up to their mothers-in-law, in whose homes they live in. Mothers-in-law may tell them that they are strong enough to have their babies at home like any good African women. In these cultures, a woman’s self-worth and very life depend on being married and having children.

In spite of the cultural issues that hinder progress, MSF has been able to perform approximately 5,000 surgeries a year. Approximately 85 percent are successful. Success means repairing the fistula, as well as remaining continent after surgery.

Boogaard and Stewart both told many happy stories of women who arrived in misery but are soon heard giggling with other women in the same condition, forming friendships, and starting to heal the emotional wounds. When they are ready to leave, they are feeling both emotionally and physically healed, ready to rejoin the very people who had shunned them.

Stewart related that the most rewarding experiences for her are the women who arrive back at the fistula facility for a C-section and leave nursing their babies. One particular success story was a woman who arrived under a lot of commotion in a taxi. The taxi driver sent the woman with a note stating that because he would be paid by MSF, he was convinced to take her to the fistula facility even though she had no money. She stepped out of the taxi with her chart announcing that she was 38-weeks pregnant and ready for her C-section. And, yes, the taxi driver was paid. The program provides transportation as well as a safe environment, a nutritious diet, surgery, and post-operative care.

Perhaps the most inspiring story was of an older woman who, as a teenager, delivered a stillborn after a lengthy labor and developed a fistula. Many pregnancies after that had the same result. She was an outcast, isolated, and desperate. After having her fistula successfully repaired, she became a resilient, confident woman, boosting other women in the facility. Now, she is an ambassador for the MSF fistula program, raising awareness about fistula prevention and repair. Women like her successfully spread the word and life can dramatically change for the 50,000 to 100,000 women who develop obstetric fistula every year.

More success stories can be found at http://womenshealth.msf.org/. This webcast is available at http://www.doctorswithoutborders.org/fistula-webcast. More webcasts and photo exhibits will be made available in the future as part of MSF’s project Because Tomorrow Needs Her.

War: Why Winning Should Not be the Only Goal Hope for Reducing Hunger in Iran
Scroll to top