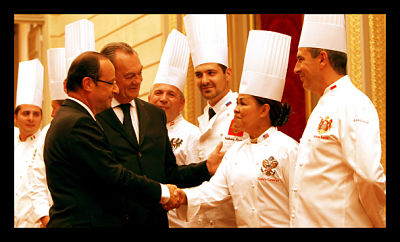 Chefs of world leaders are teaming up to feed New York City’s hungry this year. These professional chefs are members of Le Club des Chefs de Chefs, the organization of chefs for the world’s leaders. They will be teaming up with InterContinental Hotels & Resorts to serve high quality food to more than 200 individuals in New York’s Xavier Mission. The 20 chefs involved will create food “fit for a king” and will use this special luncheon event as a way to highlight world hunger.

Some of the participating chefs include Chef Cristeta Pasia Comerford, Chef to President Obama, and Chef Christian Garcia, president of the club and personal chef to Prince Albert II of Monaco. Other participating chefs hail from Canada, India, Denmark, France, and Italy, amongst several other nations.

On Saturday July 27, the chefs provided a variety of home-style cooking at Xavier Mission. 10 special dishes were featured and available to the residents of the mission. The next week, 16 restaurants of InterContinental will feature the dishes as part of their “Fit for Royalty” Menu. The proceeds from these menu items will be donated to local food banks. The menu will allow guests of the restaurants to sample what world dignitaries eat and, at the same time, draw attention to the world hunger.

Most importantly, these chefs are engaging in a new type of diplomacy by gastronomy. The world’s food issues are a topic that needs to be addressed everywhere. By combining their experience and collaborating on ideas, today’s chefs can urge world leaders to tackle global hunger. Moreover, as food experts, chefs can be leaders in the discussion on food and hunger.

In a compelling article on CNN’s Eatocracy, Chef José Andrés outlines why he believes that chefs should be involved in the fight against hunger. He suggests that food promotes a sense of fellowship that extends beyond borders. As experts of food, chefs can bridge the gap between world leaders using food as common ground.

Even Secretary of State Hillary Clinton herself has said, “Better and more effective diplomacy can happen around a dining table than at a conference table.” Diplomacy by gastronomy has the ability to be a powerful tool in mobilizing the fight against world hunger. By sharing their recipes, 20 world leader’s chefs will be able to both feed the hungry and mobilize action against food insecurity.