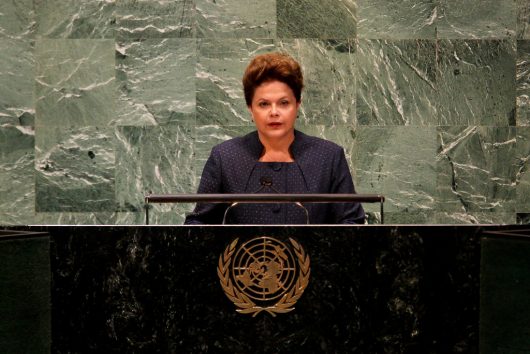 Dilma Rousseff, president of Brazil since 2011, has been impeached after breaking rules surrounding manipulation of the federal budget. More specifically, it is believed that she masked the full extent of Brazil’s economic crisis when she ran for re-election in 2014.

Prior to Rousseff’s impeachment, she argued that if she were to be impeached, Brazil’s economic troubles would only worsen. This is because a governmental change this big is felt most strongly by the poorest in society, who are most dependent on the federal government.

Rousseff’s successor, Michel Temer, stated that he hopes to reduce public spending by increasing taxes on the lower and middle classes. He also stated that social programs aiding the poor will not be immune from budget cuts.

One example of a social program helping Brazil’s poor is Bolsa Familia. During her tenure, Rousseff was an advocate for this program, which gives stipends averaging $50 per month to 47 million Brazilian citizens — nearly 25 percent of the country’s population. Dilma Rousseff had recently increased spending toward this program by 9 percent and had also reworked the definition of poverty in order to allow more people to qualify for benefits.

The only conditions for citizens to receive Bolsa Familia’s benefits are that their children be vaccinated and regularly attend school. Despite the fact that the funds help lift people out of poverty and improve community infrastructures, the social program still requires public spending.  According to Temer, this kind of program will not be immune from spending cuts, which could seriously impact the millions of citizens who rely on government assistance for survival.

On a more hopeful note, Temer is confident that he can help Brazil make an economic recovery, despite the ramifications the poor may face. He intends to reform Brazil’s costly pension system, possibly by defining a minimum age of retirement.

Whether one agrees or disagrees with Temer’s ideologies and proposed policies, it is reasonable to believe that major policy changes are the only way to get out of an economic depression. Temer has been vocal about his preparedness to make these major policy changes. While they may negatively impact Brazil’s poorest citizens in the short run, the country’s economy may ultimately recover, resulting in a better quality of life for all.

500 Sails: Poverty in the Northern Mariana IslandsAgbots and the Eco-Friendly Unmanned Future of Farming
Scroll to top