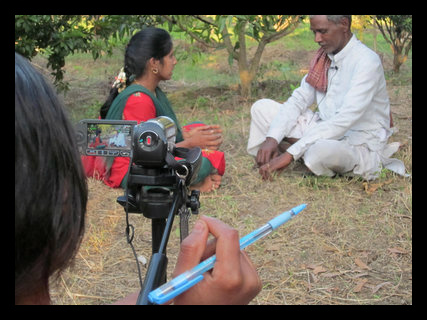 With children suffering from malnourishment all over the world, and people hungry for food, it would be amazing if simple tools could be implemented to create substantive change. The incredible reality is that so many researched techniques have now been established, with dramatic benefits. The problem is that most small, rural farmers in the developing world do not know about them.

For example, a fern called Azolla which can be easily cultivated, if added to animal feed can boost the production of cows milk by 15 to 20 percent.  Or a System of Rice Intensification (SRI), which involves transplanting rice saplings, and tending them in a certain way, can produce marked crop increases. SRI is called one of the most important agricultural innovations of the past 50 years, yet it is only known to a fraction of farmers.

For Rikin Gandhi, one of the great paradoxes of today’s world is that information is so easily transmitted, yet efforts share life-saving information to critical people is so ineffective. This was a problem he wanted to solve. An American-born software engineer working in India for Microsoft Research, Gandhi spent six months in villages experimenting with communication formats — posters, TV shows, locally-made videos, public screenings, home screenings. His impactful discovery was that short, 8 to 10 minute videos that featured local farmers (both men and women, as most agricultural work in India are done by women) talking about their experiences was the most effective method of information dissemination. Films were screened locally with a facilitator who engaged discussion, and farmers were finally highly engaged with the new information, and consequently utilized the practices. Gandhi found that when sessions were actively facilitated, people remained and participated, if not, farmers left quickly. Farmers were more likely to adopt new practices if they heard about them from someone of a similar socio-economic background, speaking the same dialect, and without too much formal expertise.

Kentaro Toyama, Gandhi’s boss at Microsoft, set up trials to test Gandhi’s approach. Among 1,470 households in 16 villages, they found that increased adoption of some agricultural practices increased by seven-times, and the cost to get one farmer to adopt one new practice dropped by ten-times (from $38 to $3.70, with this video-based model).

So Gandhi created Digital Green – a platform and process for extending knowledge and influencing behavior. Gandhi and his colleagues established the NGO and The Gates Foundation provided support. It produces locally made videos in India’s rural areas, using locals, requiring only a battery-powered “pico” projector and mini speakers, which can fit in a backpack, then projected onto a wall or sheet – a major logistical advantage. See some here.

Today, Digital Green works in 2,000 villages in India, 100 in Ethiopia, and 50 in Ghana. Working with a variety of partners, it has produced 2,600 videos that have been viewed by 157,000 farmers. It reports that 41 percent of viewers in the last two months have adopted at least one practice. Gandhi now has 60 colleagues working with him and plans to be reaching 10,000 villages by 2015.