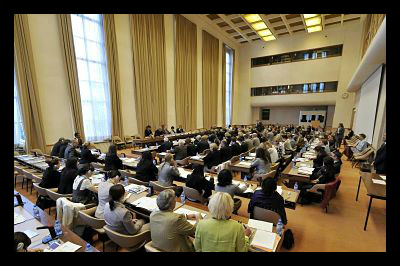 As the nature of warfare changes, so do the actors involved. The world is more interconnected than ever, and the role of transnational actors in war has increased the need for more domestic capacity. Private military contractors and private military security communities affect war, for they are (private) players that are not only held less accountable for their actions, but also benefit from conflict. Due to this revolution in military affairs, actors are starting to build relationships and institutions to address this issue. The Democratic Control of Armed Forces, known as DCAF, in Geneva, Switzerland is one of these institutions.

The Democratic Control of Armed Forces Foundation consists of over 62 member states, and is based in Geneva. There are permanent offices in Beirut, Brussels, Ljubljana, Ramallah and Tunis with staff from over thirty countries. DCAF was founded in 2000 as an initiative of the Swiss Government, and is an international foundation whose mission is to assist the international community in pursuing good governance and reform of the security sector. The Center not only provides in‐country advisory support and practical assistance programs, but it is founded on the principles of neutrality, impartiality, gender sensitivity and local ownership. DCAF also “Develops and promotes norms and standards, conducts tailored policy research, and identifies good practices and recommendations to promote democratic security sector governance.”

The Democratic Control of Armed Forces operates globally, with a particular emphasis on Africa, the Middle East and Southeast Europe. Their outreach and policy research programs also cover Southeast Asia, Caucasus and Central Asia and Latin America. DCAF works directly with national SSR stakeholders, bilateral donors to support SSR and to promote coherence, coordination and complementarity, multilateral institutions (in particular the United Nations, the European Union, the African Union), as well as other regional and sub-regional organizations. The Democratic Control of Armed Forces focuses on security sector reform, also known as SSR, and strives for a holistic agenda by combining various capabilities. DCAF’s expertise reside primarily in the realm of parliamentary oversight of the security sector, intelligence governance, private security governance, gender and security and, public-private partnerships and security governance. DCAF works with a diverse base of actors in order to develop security sector reform policies. It has become a tool used to combine the various faces of war and peace in dialogue, debate and discovery.

Malnutrition in MozambiqueWhat Are the Impacts of Microfinance, Really?
Scroll to top