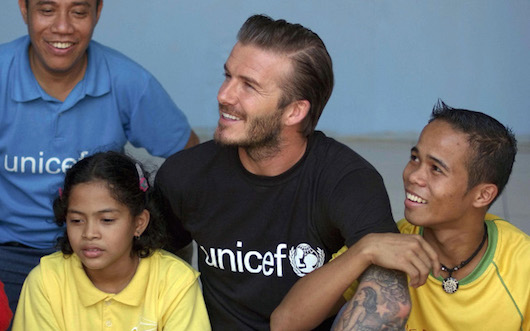 David Beckham’s adoring fans will have the opportunity to take a piece of him home thanks to the David Beckham: The Man exhibition and auction this year.

Phillips will host a viewing and gala auction for David Beckham: The Man at its London gallery that is open to the public.

This innovative international gala auction is part of a high-profile, three-year global philanthropic program and exhibition of signed contemporary photography featuring and celebrating David Beckham, according to UNICEF.

The works will be on display from Feb. 27 until the auction on March 10. The proceeds from the auction will go towards 7: The David Beckham UNICEF Fund and the Positive View Foundation.

“This wonderful project in support of my own 7 Fund at UNICEF and Positive View Foundation will help create change for children and disadvantaged young people around the world,” Beckham said in UNICEF’s press release for the event.

7: The David Beckham UNICEF Fund was founded in 2015 to mark the tenth year Beckham has served as a UNICEF Goodwill Ambassador. 7 aims to protect millions of children from danger and provide help when they need it most, according to the fund’s website.

“David Beckham is the quintessential modern man, his fame far exceeding that of a sportsman. He is universally recognized, an icon of modern masculinity and a magnet for photographers,” David Beckham: The Man Curator Kathy Adler said in UNICEF’s press release for the event. “His appeal is ubiquitous: he is happy being a gay icon, a teenage idol, a spokesperson for sport, a UNICEF Goodwill Ambassador.”

In the 10 years Beckham has served as a UNICEF Goodwill Ambassador, he has traveled to Sierra Leone, South Africa and the Philippines to see UNICEF’s work in action.

Beckham used his celebrity status to call attention to the adversity faced by impoverished children around the world and continues to raise awareness in his role as a global ambassador.

Beckham has also met with U.K. Prime Minister David Cameron to request more be done to help children affected by malnutrition around the world, according to Beckham’s ambassador page.

The Positive View Foundation was founded in 1994 as a philanthropic photography project and has morphed into an organization that helps disadvantaged young people in the U.K.

Over 50 pieces of photography from 27 different photographers including Annie Liebovitz, Nadav Kander and Inez & Vinnodh will be available for bidding, according to UNICEF.