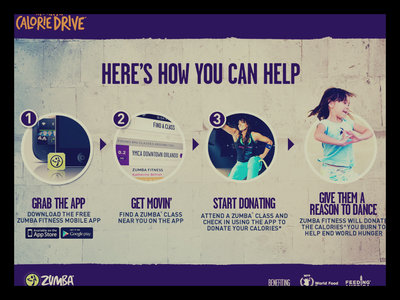 Zumba Fitness has launched, “The Great Calorie Drive”, encouraging participants to not only burn calories, but donate them as well as they dance away world hunger. Zumba is a dance fitness program based on world rhythms and choreography and is working with Feeding America and The United Nations World Food Program.

The program invites individuals to “give the world a reason to dance” and to donate calories burned to Feeding America and the World Food Program. Zumba Fitness CEO, Alberto Perlman believes hunger is one of the world’s greatest solvable problems, and they are eager to do what they can to combat it. They hope to be able to touch millions of lives through this program.

The campaign will donate the equivalent of the average amount of calories burned per class, which is around 750, to Feeding America and the World Food Program from now until June 13.  They would like to reach the goal of 2.6 billion calories, which will translate into roughly 3.5 million meals for the worlds hungry.

In order to promote the program, Zumba released a PSA featuring performing artist Lil John and multi-platinum selling artist Phillip Phillips. The PSA featured an inspirational look into how average people can make a huge difference in the lives of many while bringing us closer to eradicating a problem that effects millions of people world wide.

The program will work through a free mobile app available on smart phones. The app will direct people to their nearest Zumba class where they will check in on the phone and the calories will be automatically donated towards, “The Great Calorie Drive” . Additionally, Zumba will be offering limited edition apparel and accessories. Thirty percent of those proceeds will also go towards Feeding America and the World Food Program.

$27 Sparked a Global Development Phenomenon Half of Syria Will Be in Need of Aid, Says UN
Scroll to top