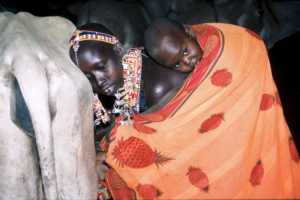 Local milk production in West Africa has already risen by 50% between 2000 and 2016 to about 4 billion liters in 2019. Producing and selling milk provides an important source of income for locals. Around 48 million nomadic herders and agro-pastoralists participate in the milk sector, while others work in the trading and transportation of products. Additionally, the sector produces jobs in processing and marketing.

Despite substantial growth in recent years, the dairy sector in Africa faces major drawbacks such as high production costs and low yields. This is due to the lack of infrastructure and appropriate equipment in the production process. Another factor is the low-grade feed that affects animal health.

Local production does not yet have the capacity to meet 100% of demands in the sector. Only 50% of consumption comes from local production, and imported milk powder helps meet the remaining needs. On top of existing internal constraints, dairy production in Africa has to compete with cheap milk-based products imported from the European Union (E.U.). These foreign products continue to increase in quantity and threaten to overtake the African market.

In 2018, the European Union exported 92,620 tons of milk powder to West Africa and 276,982 tons of fat-filled milk powder. That is an increase of 234% since 2008. Fat-filled milk mixtures comprise of milk constituents and vegetable oils, such as palm oil, enrich them. This milk derivative sells for 30% cheaper than whole milk powder in African markets, generating unfair competition for African dairy farmers.

For instance, in Burkina Faso, 1 liter of pasteurized local milk costs 91 cents in comparison to only 34 cents for milk made from E.U.-imported powder mixtures. Since competition is almost impossible, local livestock farmers suffer huge financial losses as imports increase. “I’ve tried selling my milk, but most of the time it goes to waste and ends up being poured away,” said Hamidou Bande, the president of Burkina Faso’s National Herders’ Union.

Furthermore, experts say that the milk lookalike does not contain the same nutritional value as whole milk with regards to its fatty acids, minerals and vitamin content. Locals are concerned about the health impact the milk import could have on their community. “It’s a milk that is flooding our schools and is very unhealthy for our children,” said Sommanogo Koutou, Burkina Faso’s minister of animal resources. Nevertheless, these products sell at wide availability because of their large consumer base, who have less purchasing power and thus prefer the cheaper option.

Members of the E.U., West African governments and private companies have all taken actions to support the local dairy market.

Vétérinaires Sans Frontières is a Belgian NGO supporting agriculture and breeding in eight African countries. It has involved itself in helping farmers improve all stages of production including livestock feed, herd health and animal hygiene, milk collection and processing as well as marketing for their products.

Fairebel, a Belgian milk brand, created the “advocacy brand” Fairefaso. It has partnered with local milk producers in Burkina Faso to support small-scale local farmers by helping them maximize sales and profits.

ECOWAS, short for the Economic Community of West African States, has launched the Regional Offensive for the Promotion of Local Milk. It aims to increase the production and collection of fresh milk.

With cooperation from European producers and institutional support, change is forthcoming for African livestock keepers and farmers. With increased funding and new import regulations, projections have determined that dairy production in Africa will continue growing to meet the needs of the local communities and beyond.