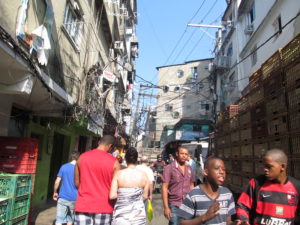 COVID-19 has decimated the people of Brazil as 15,000 to 30,000 new cases are reported daily. As of July 31, 2020, the country had 2,625,612 confirmed cases and 91,607 deaths. The pandemic can be traced back to the wealthy but has now trickled down into the country’s most at-risk communities. These communities are the indigenous and homeless populations and those living in favelas and slums. Furthermore, Brazil’s medical system is at capacity as nearly 100 nurses succumb to COVID-19 per day. With such dire circumstances, residents of favelas have mobilized to combat the virus themselves.

Favelas became epicenters for COVID-19. The number of infected individuals is 17% of the inhabits in favelas are infected in relation to 7.5% in the entire city. Data shows that the most at risk are those of ethnic minority groups. Sao Paulo’s municipal government data states that 62% of black Brazilians are at a higher risk of dying from COVID-19 than white Brazilians. According to the Ministry of Health, one out of three deceased has been from a population of color.

Rampant gang warfare is well-known in favelas. However, favela residents initially stuck to social distancing guidelines due to local drug gangs imposed curfews in some settlements as well. In Rocinha, residents feared death threats as a result of violating curfew. In another favela, gangs enforced a strict 8 a.m. to 8 p.m. curfew for nearly a month.

Also, gangs have used a variety of methods to spread the news of these lockdowns. Large posters, social media and public announcements made through megaphones atop moving cars have been their delivery method. They even boldly proclaimed that if the government does not have the capacity to fix it, organized crime will solve it. Favela gangs are the first to know about what happens inside these settlements and often make decisions regarding any actions taken.

Luiz Henrique Mandetta, the former health minister, even recommended that authorities have an open discourse with gangs to quell the outbreak within the various favelas. However, removing Mandetta from his position led to his recommendation never coming into effect.

In Brazil, 13 million people inhabit favelas across the country. They are unable to handle self-isolation or maintain proper sanitary standards needed to halt the spread of COVID-19. However, residents throughout the various favelas have made notable efforts to fight back.

Paraisopolis is the second biggest favela in Sao Paolo. It has taken on a local production of face masks, the distribution of food rations and hygiene supplies to aid residents. Two makeshift sick wards have opened for those who might be a carrier. For two weeks, 300 residents used the facilities for isolation.

Furthermore, favelas have even organized ambulances to respond to emergencies with doctors, and three have been hired in Paraisopolis. When the municipal government failed to help, proceeds came from donations and crowdsourcing efforts.

Additionally, around 100,000 people live within Rocinha, yet 1 out of 4 tested positive for COVID-19. Rocinha is the largest favela in the country and it is located in Rio de Janeiro. Further outreach efforts via campaigns to inform the denizens of risks associated with COVID-19 continue.

From daycares to financial aid for children to study, the favelas are reacting in solidarity to the outbreak. These initiatives taken by Brazil’s most impoverished population are a stark contrast to the official response from municipal governments across the country. A bold, yet critical, move to combat the pandemic.