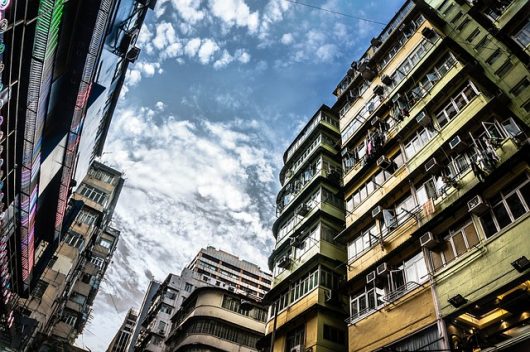 Just like its skyscrapers, the cost of living in Hong Kong is among the highest anywhere in the world. In a Mercer survey published in June 2017, Hong Kong was named the second most expensive city globally for expatriates to live and first among developed nations.

Hong Kong is a destination city for businesses and professionals alike, boasting over 4,000 individuals worth over $30 million each. Many businesses have found Hong Kong to be one of the most agreeable cities to reside in due to the low 16.5% corporate tax rate.

For the less fortunate, however, the cost of living in Hong Kong is confining– literally.

With a monthly wage of $2,652, the average Hong Kong citizen spends most of their earnings on rent alone. The smallest apartments in Hong Kong cost around $1,000 per month, with more spacious units ranging from $2,000-2,500 before utilities. Many Hong Kong residents work longer hours and split small flats into sleeping cubicles in order to save on rent.

With so much disposable income being eaten up by housing costs, many residents face the very real problem of food insecurity. Going out to restaurants has become a luxury, as many people must now rely on charitable donations and government assistance to eat.

For Hong Kong’s poorest, those living on less than $328 a month, the cost of rent in Hong Kong makes living in the city unsustainable. Over 30% of the city’s elderly population lives in poverty, while the wealthiest families make over 44 times what the average citizen makes.

Economists have urged the government of Hong Kong to institute universal incomes and pensions to prevent the wealth gap from widening. Efforts to address the growing wealth inequality in the country must be made with urgency for the sake of Hong Kong’s struggling citizens.