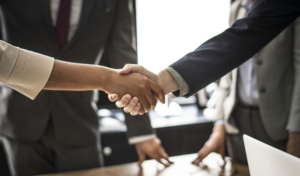 China is currently the continent’s largest trade partner. China and African nations exchange roughly $160 billion worth of goods every year, and one million Chinese have moved to Africa in the past decade.

China says that more than half of its foreign aid goes to Africa; between 2010 and 2012, China provided Africa with more than $14 billion in foreign aid. Additionally, China funded the building of the $200 million Africa Union headquarters in Addis Ababa, Ethiopia, as “a symbol of deepening relations.”

China also provides economic guidance in Africa. In a November 2014 conference, officials from China and the African Union met in Ethiopia to discuss how Africa can learn from Chinese industrialization practices. A joint-commissioned comparative study on Special Economic Zones in China was presented at the conference, with the goal of improving Special Economic Zones in Africa.

Many, including Ethiopian president, Dr. Mulatu Teshome, see China’s leadership role in Africa as a good thing: “Benchmarking China’s best practices in industrialization is essential, in that that it is almost unthinkable to realize the African dream of becoming an industrialized, united and prosperous continent by 2063 only through Africa’s own technology generation.”

It would appear that China is uniquely suited to provide development leadership in Africa. Much of China’s success in reducing poverty amongst its own people stemmed from agricultural and rural development. Similarly, rural poor account for over 70 percent of sub-Saharan Africans living below the poverty line. According to a World Bank study, roughly three-quarters of China’s overall poverty reduction between 1981 and 2001 came from gains to the rural poor.

Some, however, have accused China of “resource colonialism,” asserting that China is using Africa’s mineral wealth to spur its own economic growth — a charge that foreign minister Wang Yi has adamantly denied.

Others wonder whether China’s political role in Africa is expanding along with its economic role. China insists that its support is unconditional, and that it has no designs on interfering in the political affairs of African nations. “Politically, we always speak up for African countries and uphold justice. Economically, we help African countries to enhance development to achieve prosperity,” said Wang.

A recent article in the Economist argued that, while China’s win-win rhetoric is largely empty, China appears to have no designs on building its political influence on the African continent. “Some thought, after a decade of high-octane engagement, that China would dominate Africa. Instead it is likely to be just one more foreign investor jostling for advantage.”

Causes of Human TraffickingEurozone Instability Predicted in 2015
Scroll to top