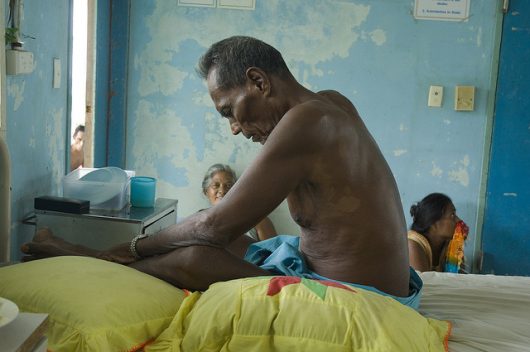 Kiribati is a small island country in the central Pacific. The people of Kiribati have a positive outlook on life, despite the fact that many factors such as a lack of sanitation, overcrowding, high unemployment and environmental threats have led to 22 percent of the population living without basic needs.

The Ministry of Health in Kiribati provides free hospital services and public health and nursing services on the island and tries to focus on disease prevention and education. Yet, the persistence of urban poverty, climate change and poor water quality have led to a nearly constant influx of disease on the island.

Diarrheal Disease
Diarrheal outbreaks are common diseases in Kiribati for a few reasons. One of the most prevalent sources of diarrhea is dirty water. One in 20 infants dies before their first birthday in Kiribati from drinking unclean water. Some other causes of diarrheal disease are poor food handling and public defecation due to overcrowding.

Dengue Fever and Chikungunya Virus
Two other common diseases in Kiribati are dengue fever and chikungunya, both of which are viruses transmitted through the Aedes aegypti and Aedes albopictus mosquitoes. In 2015, it was reported that more than 12,000 people have been infected with mosquito-borne illnesses.

Ciguatera Poisoning
Ciguatera poisoning comes from consuming reef fish that have been contaminated by ciguatoxins, or marine biotoxins that cause food intoxication. The toxins can cause a wide range of neurological, gastrointestinal and cardiovascular symptoms. According to research, the toxins mainly develop in shallow waters that contain seaweed, sediments and dead coral. Thus, it is possible that low sea levels and surface water temperatures are contributing to the poisoning.

Lifestyle Disease
Some of the most common diseases in Kiribati are those that stem from certain lifestyle habits or behaviors. Diseases of this kind include HIV and other sexually transmitted infections, cardiovascular disease, respiratory disease and diabetes. The prevalence of HIV and STIs are due to a lack of sexual education. Cardiovascular disease and diabetes are most often associated with physical inactivity and poor eating habits. Tobacco use also contributes to respiratory disease and cancers.

Kiribati is working with the World Health Organization (WHO) on a national development plan for the 2016-2019 period that includes operational plans for the Ministry of Health and Medical Services. Immediate goals include reducing the risk of non-communicable diseases, improving maternal and child health, preventing the spread of communicable diseases and strengthening health service delivery.

Awareness and prevention of communicable disease will be key to implementing this plan. With the intervention of WHO, Kiribati has made strides in providing cost-effective, quality health services and preventing disease.