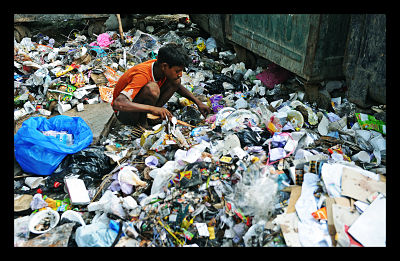 Empowerment is one of the single biggest positives to come out of aid work. Not merely giving hand-outs, but enabling people to take the step up on their own power. Earning something gives someone a huge advantage over simply being given it.

Better yet when local governments can act to empower their own citizens. In the city of Pune, India, the government, rather than contracting with private contractors, has instead engaged waste pickers to collect the majority of the city’s garbage. Waste pickers are a ubiquitous sight in Indian landfills. A marginalized segment of the urban population, waste pickers earns a living sifting through trash in order to sell recyclables. It’s a grueling job to earn a meager wage, but many have no alternative.

Change in Pune began twenty years ago though, with a collective called Kagad Kach Patra Kashtakari Panchayat (KKPKP). This collective spent years mobilizing the waste pickers of the city until as an organized body they were able to get the attention of the city government. In 2007, KKPKP and the Pune municipal government formed another collective, Solid Waste Collection and Handling (Swach).

The innovation of the Pune government was then engaging the waste-pickers to handle the majority of the waste collection, as opposed to hiring private contractors. Today, the number of houses served by Swach is 400,000, or 90% of the city’s non-slum households. Houses pay on average 60 cents a month for the services of the waste-pickers, meaning the government outlay is an eight of what it would be for a truck-hauled waste disposal system.

Additionally, waste-pickers segregate trash after collection: recyclables, organic matter for compost, and non-recyclables for incineration. Interestingly, before the introduction of SWACH, the informal collection of waste pickers meant that nearly 50 percent of plastics were eventually recycled. With a more formalized set up and the ability to segregate trash at an early phase, this number could rise. This is significant, especially when you compare that to an 8.2 percent recycle rate for plastics in the United States.

This is a rare success story that combines the empowerment of a lower class with immediate tangible economic benefits and improvements to environmental health. While the future stability of Swatch isn’t certain, and any expansion of the program will face social and political checks, the groundwork has at least been laid.

How to Make a Floating Garden Miseducation: A Short Film for the Why Poverty? Initiative
Scroll to top