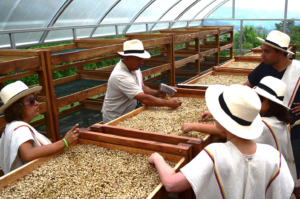 Coffee is the world’s second-favorite drink, only behind water. In the U.S., Americans drink more than 580 million cups of coffee per day. Worldwide, more than three billion cups are consumed per day. To support the world’s love of coffee, many developing countries rely on their coffee-growing industries supported by small farmers. The majority of these small farmers, unfortunately, live in impoverished conditions. With the popularity of coffee and the market, there is a way that coffee farms can fight world poverty.

Small farmers produce about 80 percent of the global coffee supply. These farmers, known as smallholders, are defined as “owning small-based plots of land on which they grow subsistence crops and one or two cash crops relying almost exclusively on family labor.” An estimated 25 million smallholder farmers produce the world’s coffee supply. Unfortunately, they earn less than 10 percent per pound of the sale value of their coffee. Combined with the added costs of production, this quickly becomes an unprofitable business.

With the current situation being so hard economically, more and more coffee farmers have moved out of the industry. The past couple of years have brought drought and an increase in crop diseases like “coffee rust.” Coffee prices have dropped to a 12 year low.

Not only are farmers unable to support themselves and their families, but there are also a number of other challenges that have pushed them out of the coffee growing business. The environment in which coffee grows best requires a high altitude that is usually in remote and mountainous areas. This limits access to markets and adds the cost of transportation and middlemen. Changing weather conditions and lack of environmentally sustainable practices along with weak management and poor training have led to the inefficiency of coffee production.

In the department of Risaralda in Colombia, lies a small coffee farm known as a “Finca del Café.” Here, there are 10 hectares of land dedicated to the growth of Arabica coffee, a type of coffee that does best in the high altitude. The winding path through the Finca reveals the complex process of coffee growing that takes years of time. The farmer, who learned to grow coffee from his grandparents, expressed the unsustainability of the coffee business in 2019. They had to turn to other sources for revenue such as capitalizing on tourism of the area and building conference buildings.

Is Fair-Trade The Solution?

Despite the current situation of coffee production, the demand for the drink is increasing. If the current trend continues, there is predicted to be a shortage by 2050. In order to help small farmers and the coffee business, many companies are turning to fair-trade. According to the Institute for Faith, Work, & Economics, “the promise of the fair-trade movement is that coffee growers in poor nations will receive a higher price for coffee if it is produced in better working conditions with higher wages.”

Unfortunately, no solution is perfect. Fair-trade impacts farmers by artificially raising the sale price of coffee, targetting production and not poverty. Other initiatives that focus on coffee farmers’ operations and management have shown more success. NUCAFE (National Union of Coffee Agribusinesses and Farm Enterprises) works to facilitate services for Ugandan coffee farmers while having them take ownership of their crops. In Colombia, coffee farmers are investing in digital tools to better manage their farms and transactions.

There are many coffee farms in Colombia’s Cafetero region facing these issues. While some are forced to give up coffee due to the lack of profit, others try to maintain the culture of coffee growing. Coffee farms like the aforementioned “Finca del Cafe” make it their purpose to inform others of the coffee-making process and also to bring awareness to the problems modern coffee farmers are facing.

Local coffee is sold all around the region and coffee is a large part of Colombia’s larger society. The problems encountered by coffee producers can ultimately change Colombia’s culture, a country that prides itself on its coffee.