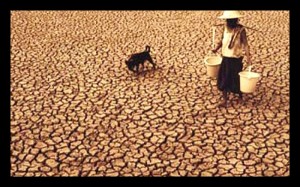 The international community has recognized the significance of climate change and its possible implications. President Obama’s 2010 National Security Strategy states that, “The change wrought by a warming planet will lead to new conflicts over refugees and resources…”

Recent studies have shown that climate change has lead to an increase in conflicts.  The U.N. Environment Program’s “From Conflict to Peace building” reported that approximately 40% of civil wars have been associated with natural resources. Resource availability has come under immense stress due to climate change. Natural resource-based conflicts have particularly affected Sub-Saharan Africa. And this will continue to be a problem as, in the future, the region will likely experience longer and more extreme droughts and floods, which could lead to food and water insecurity as well as increased migration and poverty. All of these factors could increase the risk of conflict in the region. To counter this increase in conflict, governments should develop new climate adaptation policies.

The UN Environment Program shows that resource-driven conflicts are twice as likely to relapse within five years of negotiations. To prevent this problem, environmental concerns and climate adaptation strategies should be included in conflict negotiations. Some non-governmental organizations, including Tearfund and the International Institute for Environment and Development, have gone directly to local communities to manage resource conflict. They believe that, by building local organizations to manage resources, the chances conflict will occur are reduced. Governments need to recognize that they will have to look to more climate adaptation policies if they wish to prevent future conflict in their countries.