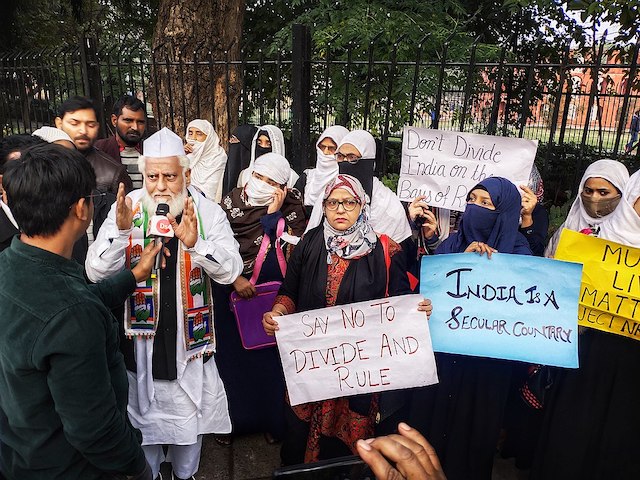 Blood, tears and the echoes of piercing cries have filled India’s capital New Delhi for weeks now. People participating in peaceful anti-Citizenship Amendment Act protests in India have face the wrath of violent police officers. India’s youth has taken to the streets to fight against the Citizenship Amendment Act (CAA). The CAA allows for the marginalization of the Muslim community by restricting their ability to gain citizenship in India. This has created great discomfort for many of the 138 million Muslims currently living in India, who make up around 13.4% of the total population.

The bill appears to be most beneficial to Hindus, who account for 80.5% of India’s population. Its introduction has caused a national uproar as it highlights century-old religious intolerance in India. Many argue that the bill is in violation of Article 15 of the Indian constitution, which prohibits discrimination on grounds of religion, race, caste, sex or place of birth. The public has drawn similarities between the current situation and the problematic partition of Pakistan and India.

How does the CAA actually affect citizenship?

The CAA specifies that illegal immigrants from Pakistan, Afghanistan and Bangladesh can receive Indian citizenship if they have proof of residence for six years under the condition that they affiliate with Hindu, Sikh, Buddhist, Jain, Parsi or Christian religious communities. However, Muslim immigrants from the same countries must have proof of residence for at least 12 years; it is argued this component contravenes Article 14 (equality for all people) and Article 15 of the Indian Constitution. The bill reduces the Muslim community to “second-class citizens” based on their religion alone.

Prime Minister Narendra Modi expressed his dissatisfaction with the Citizenship Amendment Act protests in India. He defended the bill, claiming there was no harm in trying to uplift the religious majorities in India, especially because they were discriminated against in other countries, like Pakistan. His party, the Bharatiya Janata Party (BJP), has previously promoted policies and ideologies that favor Hindus and disfavor Muslims.

Further, members of the party have openly labeled Muslims as “terrorists” and have asserted that Hinduism is the dominant religion. Recently, BJP representative Chief Minister Yogi Adityanath claimed that the protests are stopping India from becoming a global power. However, he offered no explicit elaboration as to how they are doing so. It is evident that influential parts of the Indian government support and promote anti-Muslim sentiments.

Jamia Millia Islamia, a university in New Dehli with a significant population of Muslim students, is a center for Citizenship Amendment Act protests in India. Despite the peaceful nature of the protests, several videos of physical harassment at the hands of law enforcement have surfaced. This footage shows police charging students with lathis; many criticized this act for being unwarranted.

The Path to Equality: Pleas to the Supreme Court

Awareness about the CAA’s unjust components has spread across the country. Because of this, numerous petitions against the act have been filed at the Supreme Court of India. This same method was implemented previously against Section 377 of the Indian Constitution, which criminalized homosexuality. The Supreme Court later repealed the law thanks to the various protests and petitions filed across the country.

As the government continues to defend the bill, the public’s last hope is the Supreme Court, the only institution that can stop the implementation of CAA. On January 22, 2020, the Supreme Court did not issue a stay on the petitions filed against the bill and instead gave the central government four weeks to respond. This further angered the public and has continued to help the youth hold consistent protests all around the nation. However, as of March 5, the Supreme Court announced that it will consider petitions against the CAA after resolving matters pertaining to the Sabarimala issues.

The path taken by the protestors has proven to be effective in the past. The youth of India aim to strike down the CAA in court with the law on their side. Citizenship Amendment Act protests in India display the changing mindset of the country’s youth. These protests also promise hope to those ostracized by the government on the basis of religion. As religious tolerance is now a priority for the majority of India, unfair practices promoting inequality are bound to disappear in the near future. As for the present, the Supreme Court will decide whether CAA can be implemented in India within the next few months.