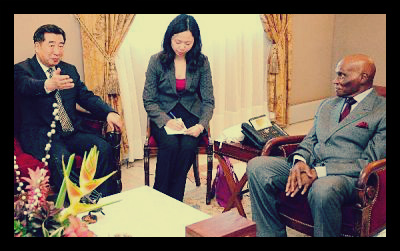 A growing number of Chinese migrants are working in Africa due to economic growth in recent times. While many world officials claim China’s relations with African nations are heavily linked to exploitation of resources, such as Africa’s gold, diamonds, timber and oil, China has since the 2000s began migrating to nations without these resources.

These factors are suitable for China’s workers to invest in Senegal. The motivations behind the Chinese workers as a whole are business-rooted. Senegal’s compliance to work with the Chinese is based on a desire to seek diverse investment opportunities and trade partners, as well as an improved position in international affairs.

With the large Chinese presence in African nations, Chinese traders have created competition among the migrants. This competition has forced many workers to expand into other business sectors, thus supporting the economic growth.

Historically, China and Senegal have had international relations with each other since 1971, (with a gap between 1996 and 2005, where Senegal acknowledged Taiwan) the growth of Chinese migrants traveling to the nation increased greatly in 2005. Today, most Chinese in Senegal are completing state work in infrastructure, communication, mining, and oil.

The business relationship still remains unbalanced, however. The Senegalese imports are very small compared to the Chinese exports to the West African nation. However, officials know this is common for Chinese relationships with African nations, and this is just another example of how China’s economy wields strength and influence.

To visualize, in 2010, China and Senegal reached $549 million, where China invested $45 million in Senegal, primarily within the infrastructure sector.

In late September of this year, the Chinese ambassador to Senegal, Xia Huang said China is looking for ways to share its developmental experience and knowledge with the Senegalese to boost further their emerging economy. The ambassador explained how the relations between Senegal and China are still growing in a positive way.

At the celebration of China’s National Day on October 1st, he said Sino-Senegal relations had, “remained fruitful, tangible and has continued to give concrete results to the Chinese and Senegalese people.”

In addition, Xia mentioned that even though China is the second largest economy in the world, 100 million Chinese people are living below the poverty line. Concluding, Xia said by the year 2021 Chinese officials will double the nation’s GDP.