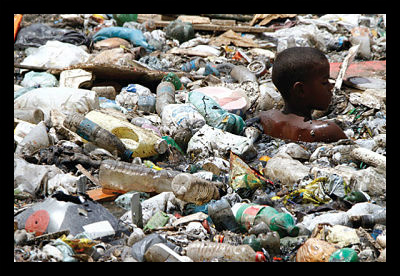 Brazil’s metropolis, Recife, is often associated with mystical bridges, vibrant entertainment and picturesque beaches. The splendor of this tourist hub, however, has recently been blighted, when in November the Jornal do Commercio released a photo of a nine-year-old boy swimming in a garbage-filled canal beneath one of the most famous bridges. What’s more, he was picking cans out of the contaminated water so that he could sell them.

Although Brazil has the ninth largest economy in the world, it is fraught with extreme economic disparity. Half of the country’s income is enjoyed by a meager 10 percent of the population, while the poorest 10 percent receive less than one percent.

Half of the country’s 60 million children live in poverty.

The photo of nine-year-old Paulo Henrique exposes this grim reality. According to government accounts, in Recife alone nearly 65,000 children live in the slums in the Arruda and Campina Barreto neighborhoods on the city’s north side. And a good majority of them are making their fortunes by wading through waste.

In reaction to the photo, the Brazilian government promised to provide welfare for Paulo, his mother and his five siblings. As a more all-encompassing response to the issue of poverty, the country created the first global center for poverty reduction in March. Mundo Sem Pobreze (World Without Poverty), will become a market of ideas and experiences in applying programs to benefit the most disadvantaged citizens.

The inspiration behind Mundo Sem Pobreze came from Bolsa Familia, the most successful Brazilian program in history. In just one decade since its advent, the program has managed to reduce poverty by half in Brazil, 50 million people of which were low-income Brazilians.

Though the photo of Paulo is saddening and morose, it has opened up a national conversation in efforts to address the issue of poverty. Photos can often have a profound impact on society; historically, they have served as galvanizers of radical change. During the Civil Rights Movement in the United States, the iconic photo of a young African American man being attacked by a police dog in Birmingham, Alabama pushed the U.S Government to finally intervene after decades of discrimination and violence.

Photos have the capacity to reach an entire nation, even an entire world. The photo of Brazil swamped in garbage has created a dialogue that will hopefully set the pace for a united national movement to eradicate extreme poverty.