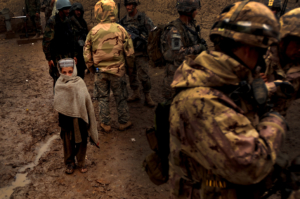 Since the Taliban overthrew the Afghani central government in 2021, the nation has experienced increased human rights violations such as the recruitment and use of child soldiers in Afghanistan.

Rise of the Taliban

The Taliban, meaning “students” in Pashto, is a conservative political-religious movement founded during the 90s amid the Afghan War which lasted from 1978-1992. The group originated as a modest band of religious scholars and students whose aim was to fight crime and corruption in Afghanistan. After deposing the Soviet-sponsored government, the group went on to establish the Islamic Emirate of Afghanistan and institute rigid Islamic law significantly impacting women’s livelihoods, religious minorities and political opponents.

On August 15, 2021, the Taliban launched its campaign to take over Afghanistan’s capital, Kabul. Soon after the initial assault on September 7, 2021, the Islamic fundamentalist group declared itself as the interim government without communicating its plans for establishing a new central government. Since the hostile takeover, the U.N. has observed growing human rights violations, including forceful censorship of journalists and protestors, regression of women’s rights, worsening socio-economic conditions, an increase in child marriage and the recruitment of child soldiers.

The use of child soldiers in Afghanistan is not a new phenomenon. Before the insurgency, the Afghan government made an effort to address the symptoms of trafficking by developing awareness programs to prepare officials to respond to such cases. Through government-sanctioned Child Protection Units (CPUs), between April 2020 and March 2021, Afghani authorities thwarted the recruitment of more than 5,000 children into armed government groups and programs and identified 20 within the military.

However, the effects of the Taliban’s takeover and the COVID-19 pandemic have hindered the state’s capacity to protect, maintain or counter threats to civil liberties, including the use of children in the militia. Before and after the insurgency of August 15, 2021, the Taliban continued to illicitly use child soldiers in combative roles such as planting and setting off IEDs, carrying out suicide attacks, transporting weapons, standing guard and spying. The Taliban has ceased to investigate, prosecute or prevent cases of trafficking or recruiting. The Insurgent forces continue to eliminate shelters and protective services for victims, resulting in a more vulnerable population.

Without a centralized infrastructure or agency to provide services, Afghan children are more susceptible to recruitment and trafficking. The Taliban has made NGOs operating within Afghanistan useless as the group has imposed crippling restrictions on humanitarian aid, ransacked the few remaining shelters and threatened humanitarian staff. The Taliban has recruited children in Afghanistan from madrassas or religious schools. The children are indoctrinated and prepared to fight in exchange for protection. Moreover, the Taliban also targets children from Afghanistan’s more impoverished rural regions, exemplifying the role of poverty in the assimilation of children into the armed forces. Young boys living in dire economic circumstances see fighting as a means to a better life. Unfortunately, this is seldom the case.

It has been a year since the collapse of the central Afghan government, and conditions within the state remain concerning. Without proper protective and preventive services, children and women and girls remain Afghanistan’s most vulnerable. The U.N. has documented hundreds of human rights violations against children along with increased attacks on schools, hospitals and humanitarian shelters. The Taliban’s presence continues to exacerbate Afghanistan’s worsening socio-economic systems, poverty and food insecurity, thus, increasing the presence of child soldiers among their ranks.

The Taliban’s continued presence in Afghanistan and the lingering effects of the COVID-19 pandemic remain the biggest threat to the well-being of Afghan citizens. Thousands of children stay within the Taliban’s ranks serving in dangerous combative roles. With the U.N. and NGOs calling for urgent humanitarian aid, hope remains for a decrease in the number of children becoming child soldiers in Afghanistan.