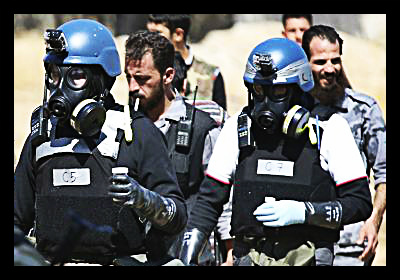 Few will fail to condemn Syria’s Bashar Assad for his use of chemical weapons this past August that reportedly killed reported 1,400 people, including civilians. However, the international community responded sternly, spearheaded by the United States.

Obama called the act an atrocity and, with the support of Russia, who had usually blocked or opposed any international action against the Assad regime, lead the United Nations to intervene. The Organisation for the Prohibition of Chemical Weapons (OPCW,) the body created to enforce the Chemical Weapons Convention in the 1990’s, has overseen the disarmament of Syria’s stockpiles and was awarded the Nobel Peace Prize this year for the work they have done around the world in chemical weapon disarmament.

Syria is now behind on the timetable that calls for the destruction of all their stores, over 1,200 metric tons, by mid-2014. Logistics are a major obstacle in this feat, as chemical weapons are stored by the government all over the country, with the potential for these sites to be amid conflict and the serious danger in handling them. Still, international resources for this endeavor are in no short supply and, perhaps most importantly, with administration of the operation handled by the OPCW, the will to carry out the plan is strong.

So the stage is set for a humanitarian victory with the U.S. and Russia as an odd couple of heroes, given the respective efforts of the two countries politically and in the physical disposal of the dangerous weapons despite some of the disparate geopolitical leanings of the two superpowers.

The parade, though, will likely be delayed as Syria, as of January 7, has only just removed a very small amount of some of their least dangerous chemicals. They may very well need an extension of their deadline, but this should be a familiar storyline to the two nations that have delayed the destruction of their chemical weapons continuously since signing the Chemical Weapons Convention accord.

In fact, this country’s refusal to relinquish the right to retaliation in the early 1990’s, wanting to retain a defensive store of the most deadly chemical weapons, delayed the drafting of the accord. Russia still has 30 percent of its self-reported stores and the U.S. has 10 percent left, according to OPCW’s 2011 report. While that might not seem like much, the two countries combine for some 20,000 metric tons or nearly 20 times Syria’s entire stockpile.

In 2011 alone, the U.S. destroyed 1,996 metric tons of Class 1 chemical weapons, the most dangerous variety, including Sarin gas. It won’t be until 2023 that the U.S. Government predicts they will finally have destroyed all of its stores, over 5,000 metric tons. Russia is expected to request an additional extension until 2020 for the destruction of their more voluminous horde.

That the two countries that control the largest share of some of the world’s most terrifying weapons are so active in the disarmament of another is certainly still commendable, although setting an example by expediently disarming themselves and reducing the availability of chemical weapons might do more for the world.