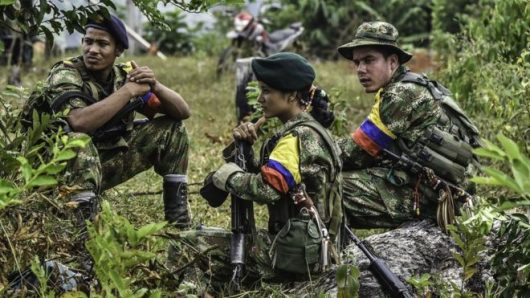 June 23, 2016, marks the historic ceasefire between Left-wing FARC rebels and the Colombian government, concluding the fifth and final item of negotiation. While peace talks have been ongoing since 2013, the peace deal witnessed by five South American presidents and a U.N. official should bring an end to the half-century war with FARC in Colombia. The U.N. will oversee the disbandment of FARC and hopes to collect all weapons by December 27, 2016.

Colombia’s long civil conflict was caused by many class tensions that hail back to its colonial history. The social classes are highly stratified between rich landowners of primarily Spanish decent and the poorer, generally mixed-race majority.

The power imbalance led to the formation of left-wing guerrilla groups like FARC. Drug trafficking financed their weaponry, significantly escalating the violence in the 1980s. Because the state was unable to defeat these groups, a right-wing paramilitary group called AUC (United Self Defence Forces) formed as a result. While the AUC was disbanded in 2006, FARC has continued to be in conflict with the government.

Both left-wing and right-wing groups have been criticized for horrible human rights violations. It is estimated that seven million people are victims of massacres, disappearances, kidnappings, murders and forced displacements perpetrated by both sides during the war with FARC in Colombia. Internal displacement alone currently affects 224,000 people, more than any other country in North or South America.

Five topics have been resolved over the last three years:

Because much of the war with FARC in Colombia between the factions was fueled by social inequality, the agreement takes measure to balance land distribution to reduce poverty.

To bring justice to the U.N.’s estimated seven million victims, Colombia’s government will allow an “international justice tribunal and a Truth Commission.” A Victim and a Land Fund will provide financial reparation. Amnesty will be given to FARC rebels who have not committed human rights violations and are willing to participate for justice.

This final phase began on June 23 with the official ceasefire. The U.N. hopes to have completely disarmed FARC by the end of the year.

While the ceasefire will not end all the Colombian people’s troubles, the agreements between FARC and the government provides a concrete end to the atrocities that have plagued them for decades and a plan toward peace.