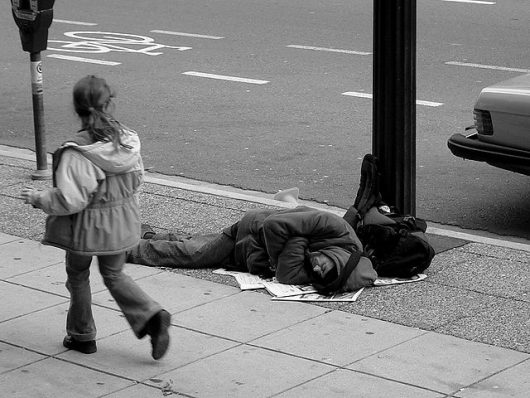 The causes of poverty in Canada, according to a set of six-year studies by Canada’s Survey of Labour and Income Dynamics (SLID), stem from being in a “high-risk” group. The Canadian government’s 2015 socioeconomic database states that 5,956,320 Canadians are low-income, with a median family income of $15,880. For the majority of Canadians, being low income is a non-permanent state. The SLID found that 36.9 percent of Canadians who fell below the low-income cutoff bracket were out the following year.

SLID reported that between 2005 and 2010, only 1.5 percent of Canadians were stagnant in the low-income bracket, with an average interval of low income of 2.4 years. The overall data that SLID reported seemed to suggest the causes of poverty in Canada are usually temporary, such as loss of a job or a decrease in wage, and that Canadians who were experiencing poverty would recover.

However, deeper investigation into the demographic of those experiencing low income and poverty revealed that only certain Canadians would recover. Within the studies were groups of Canadians with certain characteristics, deemed high-risk, that had higher rates of persistent low income than the general population.

There are five of these groups, defined as such: “These groups include people with activity limitations (physical or mental disability), singles (unattached individuals), persons in lone-parent families, people with less than high school education and visible minorities who are immigrants.”

For Canadians, being in one of these groups is not a prerequisite for low income or poverty; however, the high-risk groups experience poverty at a much higher rate than the general population. It is also important to state that these groups, such as singles and visible minorities who are immigrants are not exclusive, and that Canadians who fall into multiple groups are at an even higher risk.

There are many causes of poverty in Canada. Each high-risk group has a different set of concerns to be addressed by the aid organizations and the Canadian government.