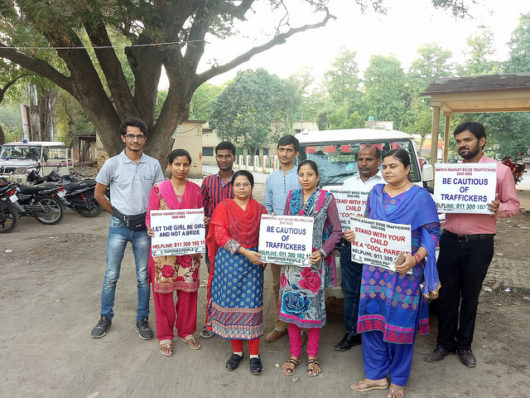 Human trafficking, defined as the illegal trade of humans most commonly for the purposes of sexual slavery and forced labor, currently claims an estimated 24.9 million victims worldwide, and the Global Slavery Index estimates that 8 million trafficking victims live within India’s borders. In 2016, there were 8,132 human trafficking cases reported in India, a 20 percent increase from 2015, and there were 23,117 people rescued from the human trafficking system.

Causes of Human Trafficking in India

The causes of human trafficking in India can be explained in part by gender-based discrimination, responsible for the deaths of approximately 239,000 girls under the age of five in India each year. Gender-based discrimination is a cultural norm in India, as sons are considered more useful to the family than daughters. This heavily patriarchal society leaves girls with limited access to education, leading to gender gaps in both literacy rates and financial earning potentials.

Because there are far more men in India than young women, bride trafficking, or the illegal sale of women for the purpose of marriage, is becoming more prevalent in India. In the more rural Northern states, where the sex ratio is worse than the national average, bride trafficking has become a norm. More than 90 percent of married women in these Northern states have been sold from other states, some as many as three times, often first becoming brides as preteens. Gender-based discrimination in India has perpetuated a societal structure that strongly favors males over females to the point of self-destruction, as men are unable to find wives, thus driving demand for the human trafficking of women in India for the purpose of marriage.

Another cause of human trafficking in India is a lack of opportunity in India’s poor communities, especially for uneducated women, to provide for their families. In 2012, only 43 percent of women in India worked regular wage or salaried positions. Victims of sex trafficking in India are predominantly young, illiterate girls from impoverished families in rural states. Although poverty is decreasing in India, 28 percent of the population still lives below the poverty line.

Poor communities are especially vulnerable to human traffickers, as they often offer better job opportunities or debt relief to lure victims. With limited opportunities to make money, offers like these are hard to decline for young women. Sex trafficking victims average 10 to 14 years of age, down from its previous average of 14 to 16, because younger girls are thought to be less likely to carry sexually-transmitted diseases.

The causes of male trafficking in India is primarily tied with forced or bonded labor. Bonded labor, defined as a system of forced or partly forced labor under which a debtor accepts an advance of cash for a pledge of labor, by the debtor or any member of the debtor’s family, for the benefit of a creditor, is deeply entrenched in India’s social structure. While bonded labor was abolished in India in 1976, many industries who rely on bonded labor schemes for their workforces have turned to the human trafficking trade for workers in their spinning mills, granite quarries and brick kilns.

Like the bride and sex trafficking trade, forced labor traffickers recruit victims from poor, rural areas of India, promising lump-sum payments at the end of their contracts. Workers are meagerly compensated for their labor, and terrible working conditions provoke illnesses that lead to wage advances and loans that keep the worker in lifelong debt to their contractors.

The Government of India has been making strides to address its human trafficking problem by heightening its border security, increasing its budget for aid to trafficking victims and drafting an anti-trafficking bill. In February 2018, the Union Cabinet passed the Trafficking in Persons Bill to be voted on by Parliament. If passed, the bill would criminalize aggravated forms of trafficking and establish a national anti-trafficking bureau, along with locally stationed anti-trafficking units. This bill also includes methods to rehabilitate victims, addresses physical and mental trauma and promoted education, health and skill development.