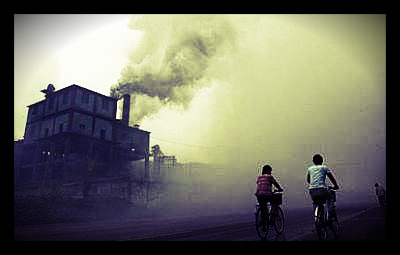 Currently, carbon emissions from the burning of fossil fuels are sought to be decreased on an international scale. Nations have been working together to combat the dilemma of climate change by seeking zero emissions technologies and by addressing carbon emissions within their own borders.

However, what makes it more difficult to calculate carbon emissions by country is that many institutions of wealthy, developed nations have been able to outsource their carbon emissions to developing countries. Apparently, studies show that, “the United States, Japan and many Western European nations have managed to ‘outsource’ more than half of their carbon dioxide emissions and evade responsibility for their share of the climate-altering pollution.”

There is already a prevalence of goods manufactured in developing countries such as India or China and consumed in developed countries in the United States and Europe. Accordingly, the carbon emissions produced by businesses or corporations are often unconsidered in regards to their total impact on the world.

After all, climate change is a global issue rather than regional or domestic. When carbon emissions are outsourced, the only winner is the public image of the institution that outsources the pollution—that is unless it is uncovered.

With prior calculations of carbon emissions categorized by country, analysts say that they will apparently have to be redone to account for all of the outsourcing. The implications are substantial for European countries who—in comparison to the rest of the world—seem to have low carbon emissons. However, with European nations accounting for a large amount of carbon emission outsourcing, the numbers may reflect their status differently.

Additionally, nations such as China and India—who attain international status as some of the highest ranking carbon polluters—see that many of their emissions actually ought to be attributed to institutions of other developed nations, such as the United States.

China and India in particular serve as examples that reflect the problems that may arise from outsourcing outdated and polluting technologies to developing countries in order to boost their economies. While their rapid industrialization has been able to increase their economic status to an extent, it has done much harm to the environment with their heavy reliance on fossil fuels.

Therefore, the issues presented require much more in-depth analysis on the true extent of carbon emissions. Thus it seems as though categorizing emissions by nation are essentially misleading.